Automatically add user to channel based on group subscription

Integrate chat with groups so when a user joins a group they are automatically added to a chat channel.

Not an exact match, but depending on how you’re setting things up, this feature may do what you need: 📣 Introducing default chat channels (automatically add users)

If not, I’d be interested to hear more about what you’re looking for here.

Thanks Dave, but the discussion on that topic is what prompted this request, you can read that here

I would like it to be as simple as you join a group and automatically get added to the corresponding chat channel.

Could I get some clarification on this item? It reads as though a user can automatically be added to a chat channel when they join a certain group. But I don’t see anywhere where you can select a group in the channel settings, it all seems to based on categories. Is this worded incorrectly or am I missing something?

I think it’s based on if the group has permission to view that category, then they will be auto-joined to the associated chat channels for that category.

Thank you, just a bit more clarification, please. My security settings normally have two groups, one for everyone to view the category and another for paid members to reply and create. So for this new feature I added a new group (Avian for this category) and added a few people along with adding that group to the security settings. 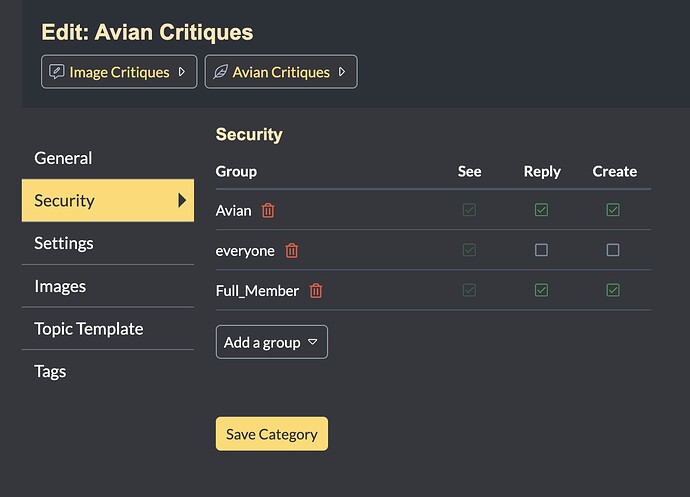 Now, when I click the auto add for chat I get this message:

It’s a bit ambiguous, it reads as all members who have access (everyone, Full_Member, Avian) which is basically everyone, will be added to this channel. Is this the case? If so it’s not terribly useful in this case and would require me to basically make all categories private until they join a group which is not realistic for my case. Thanks!

It’s a bit ambiguous, it reads as all members who have access (everyone, Full_Member, Avian) which is basically everyone, will be added to this channel. Is this the case? If so it’s not terribly useful in this case and would require me to basically make all categories private until they join a group which is not realistic for my case. Thanks!

Currently it’s everyone with ‘See’ permission who gets access to the channels associated with the category. I believe extending that to be more granular is on the roadmap, but I’m not sure how soon? Do you want to create a #feature topic to try and push it up the list a bit?

Oh, thank you. I’ve moved those posts into this topic now so we can have all that context here as well.

One thing we’re considering doing is to change things so that “reply” permissions are required to join channels. If we go that route, “see” won’t be enough to join (we may allow you to preview channels with “see” access, but not join them).

Perhaps that alone would address your use case?

I don’t think that would help as they still would not be auto joined when the join a group unless I’m misunderstanding. Basically, I have 10 or so main categories on my site, when a user signs up they go through a custom wizard asking them which categories they’re interested in, the wizard puts them in the groups they select and hides categories they’re not interested in. I want them to automatically be placed into the chat channels associated with those categories rather than having to join them individually. When my members join they are automatically added to a general membership group that gives them access to post and reply in all categories (it’s a paid membership site) so this idea of access settings to automatically add members by doesn’t work for me.

OK, gotcha. Thanks so much for all that context. Sounds like we’d need to do something like this:

This would be a neat feature! Currently, we are running contests which are running over 4 months and we create a category for each. We would live to give contest participants a private chat group based on their group membership. Currently, we would have to create an additional internal category just for the participants, which we would live to avoid. Otherwise, it’s going to become a mess handling so many categories.