We had the SAML plugin working with our AzureAD, but yesterday after we upgraded to the last commit, we started seeing the following errors when users try to authenticate via SAML:

December commits have lots of changes on SAML (configuration via site settings, for example), but I was unable to figure out if there was some change related to SAML requests that may have caused this.

How can I enable the auth debug to get more info about this?

Sorry to hear you’re having issues! You’re right that I’ve been doing a lot of refactoring on the SAML plugin in the last few weeks, so it could be related.

When does this happen? When users initiate login? Or when they are returned to Discourse?

Any chance you could share your site URL here, or via PM?

This happens whenever a user needs to login (a session expired or a new user tries to login).

Sorry but our forum is hosted internally in a private AWS account so you will not be able to access from outside our network.

Where does the error appear? In the Discourse logs? On the user’s screen? In Azure?

I also tried to find something on discourse’s logs but since the error occours on the Azure side, didn’t find any error message there.

On production.log the login process stops here (probably waiting a return from azure):

The team responsible for azure is trying to get the XML they are receiving so maybe we are able see something “different” on it. I’ll let you know when they send me.

Where does the error appear? In the Discourse logs? On the user’s screen? In Azure?

The error occours after the user click on the login button.
Then it gets redirected to the Azure login page with the following error: 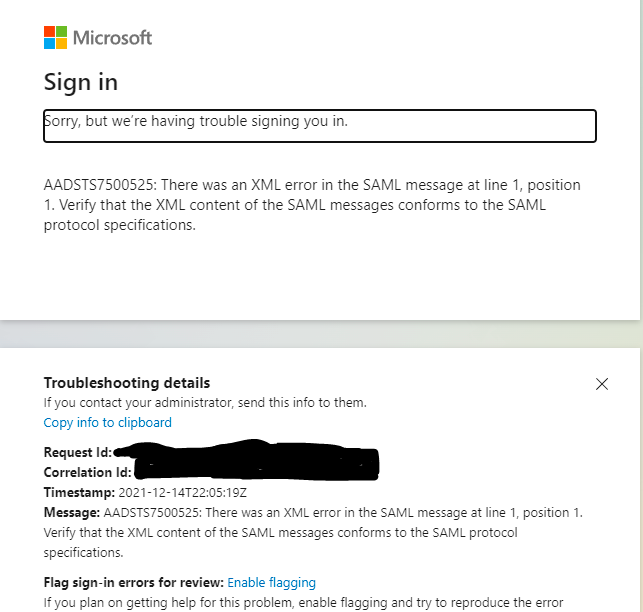 I’m afraid it’s difficult to work out what’s happening here without access to the site.

The next step would be to try and obtain the XML which is being received by Azure, and work out what’s wrong with it. You should be able to do that by checking the payload in the browser’s Developer tools, and then decoding it using a tool like this

The return of the request is a http code 400:

The inflated SAMLRequest is (some IDs hidden for privacy):

suggests that this can be caused by “Compressed SAML Authentication Requests” which AzureAD doesn’t support.

Looks like my recent refactoring inadvertently added compression for the SAML POST binding. I’ve reverted that behaviour change in FIX: Do not compress SAML request for POST binding (#55) · discourse/discourse-saml@792a51c · GitHub

Please can you try updating the SAML plugin, and then see whether things are working better?

After updating to FIX: Do not compress SAML request for POST binding (#55) · discourse/discourse-saml@792a51c · GitHub the SAML auth is back to normal here.

Thank you for the help and all the work on the plugin!