Beginners Guide to Install Discourse on macOS for Development

How i can install plugins without docker? I add git link to app.yml file, but don’t work command ./launcher rebuild app

EDIT: In my case, trying to get this running on Mac Catalina has led to a number of issues.

This seems to have been the key for me:

With that upgrade, I was able to get bundle exec rails server to work and get Discourse running on my local host. (Still haven’t gotten bundle exec rake autospec to work however).

I also had to install Mailcatcher to set up email functionality, so I ran:

In case helpful to others, I’ll leave in my earlier notes of errors and fixes I encountered (note these were prior to running the brew update postgres command I quoted above).

After running the steps in the original post, including these:
cd ~/discourse
bundle install

To fix:
Followed advice from here

Then I got the error:
Symbol not found: _SSLv3_client_method

To fix I followed the advice here to update my ruby version:

Got a traceback message:
Could not find 'bundler' (2.1.4) required by your /Users/.../discourse/Gemfile.lock. (Gem::GemNotFoundException)

How i can install plugins without docker? I add git link to app.yml file, but don’t work command ./launcher rebuild app

I have a discourse instance running without error locally on my Mac (with Catalina)–I recently followed the above instructions, so AFAIK everything is the most recent version. But the app runs slow. It can take 10 to 15 seconds to start up initially with bundle exec rails server, and then often if I make changes and reload it takes an additional 10 seconds.

This may be an issue with my local machine, but I haven’t experienced slow performance running other (non-discourse/non-rails) apps locally.

Are there any ways that people have found helpful for speeding up discourse running locally?

How much RAM and what CPU are you running?

That’s probably a big part of the issue. Ram is 4GB and processor is 1.3 GHz Dual-Core Intel Core i5.

I’m sure if my computer had more RAM and power that would help. The reason I asked, though, is that, like I said, when running other apps locally I have not experienced the issue. Though that could also be bc the Discourse instance is fairly large.

Still, was hoping there might be ways of speeding things up.

BTW, here is a related question: Do you need to be running the Redis server locally to run the local Discourse instance? In my experience, the answer is yes–I have to run redis-server prior to starting the app with bundle exec rails server in order for it to run (otherwise it gives me errors about the Redis server not running). But I did not see mention of this in the original post.

The OP includes redis in the list of things installed

This script will install following new packages on your system:
…

I think my collegue @merefield has an interesting remote setup with removes the burden off your system for a couple bucks a month.

Actually it’s a bit more than a couple of bucks (it’s a 4GB 8 core VPS - probably overkill) but allows me to develop from anywhere on any platform. Pretty performant but there will always be a few seconds delay if you restart the web server.

The OP includes redis in the list of things installed

For me to have the app work locally, I don’t just need Redis installed, I need it actively running (using command redis-server)

I think my collegue @merefield has an interesting remote setup with removes the burden off your system for a couple bucks a month.

For now I’m moving off using the local instance for testing–it’s just too slow on my computer, and also is too inefficient bc it’s basically a separate app from the live app I care about, meaning it has separate API keys, users, etc.

Instead, I’m testing on my live site using the following:

That’s my current method. Happy to hear if anyone else has suggestions for how to test out changes to your app before pushing them live (other than testing locally).

Yes, you need to have redis running. Why install it if it doesn’t need to run?

If you are not developing plugins, then, as you suggest, you don’t need a development environment, production is easier and faster

If you are not developing plugins

Is there a way to test a plugin on a real site without pushing it live? (similar to how you can test a theme by hitting the “Preview” button on the admin dashboard)

No unfortunately there is not. It has to be “live” on the site, whether a development, staging or production install. That’s because it loads Rails code that needs to be present at app boot.

Unicorn instead of rails s ?

Hmm. It seems that ./bin/unicorn works once, but if I ^C and then start it again, it doesn’t crank up and nothing is answering port 3000. Then I do a ./bin/rails s and it works again.

Is there some secret to how to restart?

Is this reproducible after a clean boot? May be a bug in MacOS? Did you upgrade to Big Sur (you will probably end up with different bugs … but who knows)

Oh. Sorry, I hadn’t realized this was in the MacOS topic. I’m Ubuntu, but I’d guess that the unicorn vs rails -s recommendation recommendation would be the same. I rebooted a few days ago because there was a power outage and I hadn’t rebooted since I got the UPS. I’ll give it another go in the next day or two.

Because of the various roadblocks and system security issues regarding macOS Catalina and above, I have found it best to bundle like this:

Since I started bundle’ing with the path switch above, getting all my Rails development apps up and running on macOS has been much easier, including Discourse.

I have a complete copy of our production server (DB and all uploads) running on macOS in the dev environment on my desktop, yay! 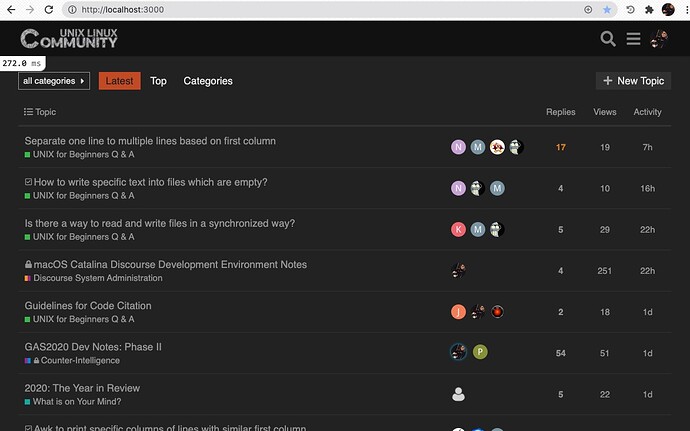 How to Move a Production Discourse PostgreSQL Database to Development

How to Move a Production Discourse PostgreSQL Database to Development On Your Production Server Note: This assumes you are running Discourse in a "two container" configuration. Please adjust your container name as required: docker exec -it data...

When trying to run bundle exec rake db:migrate I’m getting the following error:

I’ve tried uninstalling and reinstalling mini_racer with no luck. Any thoughts? Running on Big Sur.

Edit: Actually the original error I was getting was:

I got it past that but clearly something is still wrong so I wanted to point to the original error.

Edit 2: I am running on an M1 chip machine