Did you know fruit flies were the first living creatures to be sent into space? Spiders are found on every continent of the world except Antarctica

This theme component is a port and update of Auzbugs repo. It originally started out as an April fools joke and has been adapted over time. I’ve included a new bugs interact feature in this component.

This is just a bit of fun

: I suggest you use it sparingly, maybe just at Halloween

or to play a joke on someone you know

. You can target it at specific groups and users in the theme settings.

I swat him away if he starts to bug me! Yes you can exterminate them

Want to know more? Try out the preview below… 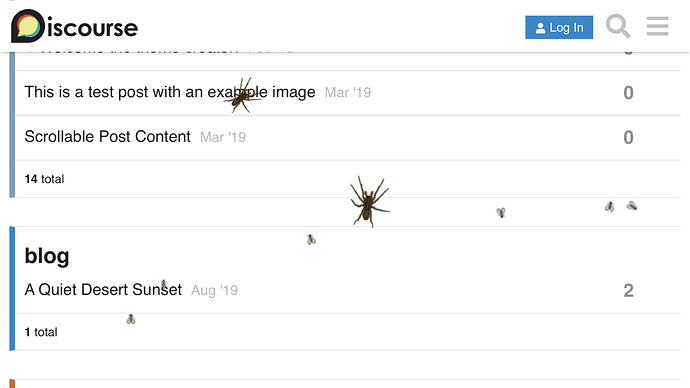 How do I install a Theme or Theme Component?

I’ve included some options in the theme settings. These include making it show only to specific users and groups.

There are a couple of methods that you can use to allow users to turn it on and off.

Just another suggestion:
Can you please add an option to enable this theme-component only at a certain time interval in a day.
For example, it would be fun if a user who visits the forum at midnight sees this

Happy to look at this unless anyone else fancies a go?

I’ve included the JavaScript code in the header file so admins can make their own customisations (that’s currently not possible if I include it as a linked js file).

I’m open to pull requests on the repo.

Great theme component! This kept me laughing! It would be useful if there was a visual check-box somewhere so the user can easily toggle it off-on.

It would be useful if there was a visual check-box somewhere so the user can easily toggle it off-on.

One way to make it so users can toggle it on and off is to convert it to a theme, as opposed to a theme component. I’ve added that to in the instructions at the top of the page.

You can also do it by setting up a group that users can freely join and leave. This takes advantage of the theme setting that can be set to only show it to specified users and groups. I’ve also added that option to the instructions at the top.

There are a couple of methods that you can use to allow users to turn it on and off.