I’ve got a fresh install of ubuntu 20, docker and Discourse. I’ve not added any plugins and only have two users in my database, however builds are taking upwards of 40 minutes to complete! There’s no specific part of the build process that is slow, the entire thing takes an absolute age to complete. It’s a pretty good spec server, and I have another happily serving 20 of my clients websites, so it isnt a performance issue.

Hangs again here immediately after for another 4-5 minutes:

I’ve tried building with --skip-prereqs to no avail, it is still taking 40+ minutes each rebuild.

Is there anything in particular that you think may be causing the problem?

Thanks for your help.

I’ve noticed that rebuilds have been taking a long time too. How much ram do you have? 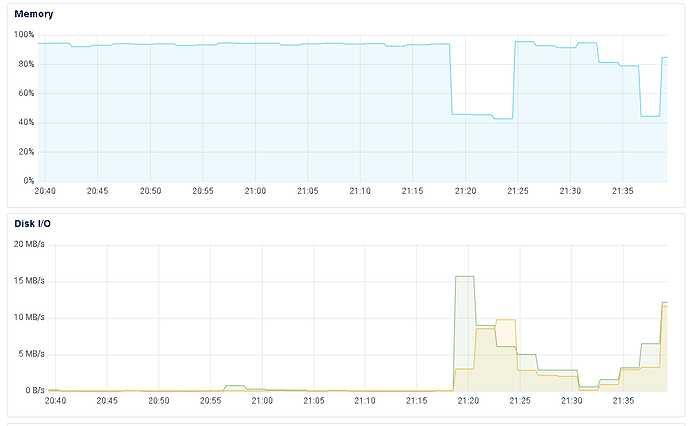 We have a regression on build times caused by the new ability to run theme tests via the UI. This is something we are tracking closely and trying to fix.

Thanks for the update @Falco

Thanks for confirming @Falco, 1GB RAM here (tight but never needed more for a lightweight site). It’s taking over 30 minutes to build (normally it’s about 10).

Going back to the first post, anyone know where that warning is coming from?

I don’t know if it’s really something to consider, but personally, in many things I have noticed that performance drops when using Ubuntu 20.04 (Discourse, WebServers, Game Servers) even trying different ways to try to optimize

At the moment I am running Discourse in a Droplet for tests with the same characteristics, it takes about 8-12 minutes to rebuild (Ubuntu 18)

the build time also depends on how many plugins & theme components you have installed.

That also takes time to rebuild.

As i have all the official plugins loaded, my build takes a bit longer

I know, but in this case I was talking about an “equality” of specifications, that is, without plugins too

I’ve not added any plugins and only have two users in my database, however builds are taking upwards of 40 minutes to complete

I don’t think the build is “hanging” at those warnings. It’s just silently building and the warnings are spit out as part of the process.

I.e. the warnings or their underlying issue are not contributing to the long build time.

Where can we track this @Falco? Thank you for letting us know about this, I just stumbled into it and it is killing us hard here.

This is a gigantic change we are working on for years, and is getting to the final stages. During it we have a period where “things will get worse before they get better”, and this is one of the “worse” side effects of it.

As soon as we complete New installs will default to Ember CLI builds in Production for all existing sites, and rip-off the old asset pipeline, we can then aggressively start modernizing it and hopefully collect some upstream gains.

There is also the potential for us to allow people on slow CPUs to opt-out of source maps and other “nice to have” features to speed up their rebuilds.

On a quad CPU with 8GB RAM on Linode and normally this is a fantastic setup, but it is a nightmare now. We have a number of changes we were planning to make, but will need to wait now until the deployment get’s back to normal’ish speeds.

@Falco I’m also noticing for the last few releases that the server performance is degrading, it takes longer to load the sites and consuming more memory. There have bee no changes to my setup in the past 2 years (plugins, hardware etc) and the number of active users on the site are also the same. Is there a way to objectively monitor site performance from within Discourse that we can then report back here. Right now the only way I know is when I open the site it takes from >8 seconds to load the first time (with earlier builds it would always be under 2-3 seconds).

What kind of rebuild times are you guys seeing? I just needed to rebuild due to an SMTP change, and it clocked in at just shy of 12 minutes for a TINY site (30 users, 400 posts).

noticing for the last few releases that the server performance is degrading, it takes longer to load the sites and consuming more memory

This topic is about “build times” not about loading page times. If you are a talking about page response times degradation, please open a new topic about it with some data.

I will thanks, after today’s update it’s now back to the normal 2-3 seconds to load the pages (nice surprise).

I think I figured out why it’s taking so long to load pages. The shared db size in app.yml was set equal to the total memory of the system. Reset it back to the default (25%), rebuild and it’s under a second now.