Calendar plugin features to make it really useful for us

Continuing the discussion from Discourse Calendar:

The Fedora Project currently has our own calendaring web app, Fedocal. It’s due for an update, and I’m thinking about whether we could replace it calendars on Discourse rather than rewriting the stand-alone app. This isn’t a feature request really, but rather a capturing of our use cases and what I see as missing as we evaluate what to do.

There are three important use cases I can see for Fedocal. If there are more, please let me know and I’ll add them to consideration.

The “events” system being added to it is currently wrong for what we need. (It collects “events” from posts across the whole site and puts them on one single global calendar. We need way more than that.

My first assumption is that we’d focus on extending the “traditional” part of the calendar plugin, which has a calendar in the first reply to a topic which is “fed” by replies to that topic alone. However, it could be possible that the other approach — grabbing events across the site — would be better. In that case, though, we’d need to extend it to be able to have multiple calendars to target. (And in that case it’d be nice to be able to embed them in pinned topics, not just be hidden in the hamburger menu.)

So, that said, here’s some things we’d need:

Actually, I think what we have today could work for this. However, some of the above — prettier and more flexible calendar display, notifications, colors — would be useful.

Pavilion is working on a Discourse Events Integration Plugin (DEIP), which, inter alia, will allow you to publish events to Discourse from other services and platforms. We submitted a proposal to DAPSI (an EU NGI program), which was accepted for funding. The program just kicked off (last night) and we’re starting work on it. This will overlap with some of the points you raised.

We could potentially expand the scope of this project to include some of the other things you’ve mentioned, i.e. those focused on event features within Discourse itself, however we’d need additional funding. If you want to discuss this further you can PM me about it. In any event, I’ll be sharing more details about the DEIP project here on meta as we progress.

We submitted a proposal to DAPSI (an EU NGI program), which was accepted for funding.

Congratulations, Angus!!! That is brilliant. This has the potential to contribute significantly to a better world (not just a bunch of Forums, but that is cool too). May you pull it off!

In any event, I’ll be sharing more details about the DEIP project here on meta as we progress.

Have you made any progress with this? It is an ever present problem for all of my forums, and which drives folk to other platforms for meetings and the like.

Hey Nathan, we’ll have some things to share in about a months time. In the meantime you can reach out to me privately on coop.pavilion.tech and I can help you setup events on your forum.

In addition to the DEIP project we’re thinking of reviving the Events Plugin and may use it to address some of the concerns mentioned above.

Have you made any progress with this?

As promised, here’s the full report on Phase 1 of the Discourse Events Integration Plugin project.

And here’s the prototype implementation of the event data model (a ruby gem). Note that the gem is in development and not ready for production use. 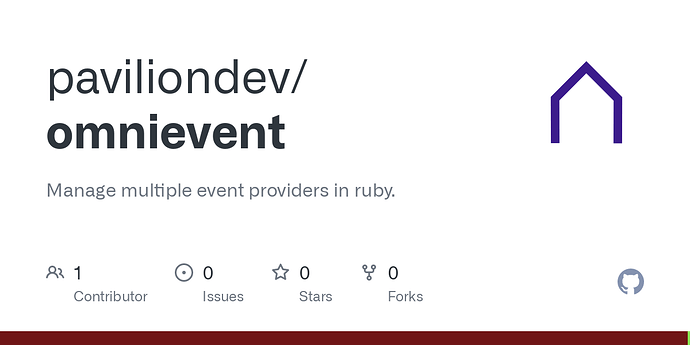 Manage multiple event providers in ruby. Contribute to paviliondev/omnievent development by creating an account on GitHub.

As you’ll pick up reading the research report, the plugin itself will be built in Phase 2 of the project.

That is impressive work, Angus. I look forward to seeing the fruit over the next wee while!

I’m intrigued by how many parallels there are with my field of health informatics. We suffer the same problems of multiple organically grown proprietary data models which don’t play nicely. And patients suffer as a result.

There is an impressive open data project which essentially seeks to do the same for all health data: