Cannot PullHotlinkedImages for some domains

Thank you for the link. Apparently it didn’t work that well:

Some linked images not displaying/show as broken support

In the end this turned out not to be reliable, it would work for a few posts but not for all. I’ll have to have another go at trying to upload the images again. I had issues with this before with requests just hanging. I’m not sure if I tried the skip_validations parameter on those requests though.

But I indeed thought about this solution as well.

Another solution could be to replace all [img] tags with empty new lines (couldn’t figure out yet to do it, but I’m searching), but there are 40000 posts, so I prefer not to fail on this one…

edit: nope, that wouldn’t work, because the “working” broken image are inside a [URL] link, so here’s what the result would look like:

The images wouldn’t be displayed

Edit 3: the same phenomenon appears (sort of) in new (non-imported) posts, but not for all image links.
Also, if the automatic image display doesn’t work, the image are displayed if we use manually any tag or image formatting used by Discourse. 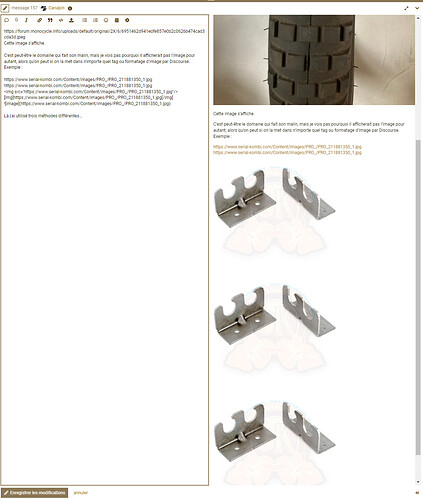 Rebuilding HTML won’t make the two first links display as images; They’ll be kept as they are, despite the fact that they should display directly an image.

BUT!
When the PullHotlinkedImages jobs are executed, then, the images break! 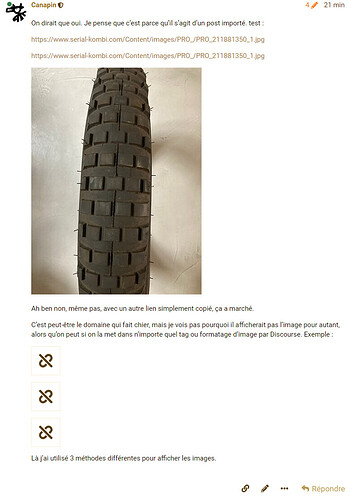 I understand less and less what’s going on and if all these issues are connected in any sort of way.

That looks like a Discourse issue… But is it?

I can’t try on an older version of Discourse, all my forums are on the latest.

(and nothing in Discourse’s logs)

This last issue is reproductible on try.discourse.org.

That’s a bug then, I’d think. I think it’s because after the image is downloaded it becomes upload://ddd.

Merci @Canapin, we’ll have a look.

The image fails to download because the www.serial-kombi.com webserver is misconfigured. It’s sending an incomplete certificate chain. The intermediate certificate is missing.

Most browsers probably have the “Sectigo RSA Organization Validation Secure Server CA” intermediate certificate cached from another site, so it’s not an obvious issue. The download fails, because AFAIK OpenSSL doesn’t have such a cache. It requires the server to send it.

See for yourself in the SSL Server Test for www.serial-kombi.com. It reports an incomplete certificate chain.

Thank you for the clarification!