So over on forum.minecraftpvp.com we were having a bit of fun and made a “2014 awards category.”
There were threads for nominations, and after the nominations were closed to go into the voting stage, all the nomination threads were made invisible (only accessible by link).

Now there’s only one topic in the category, and yet the category statistics still say “26 / week, 26 / month”.

Although it doesn’t really matter, I don’t know whether it’s a bug or intentional, so I’m just gonna post it here to let the developers know. 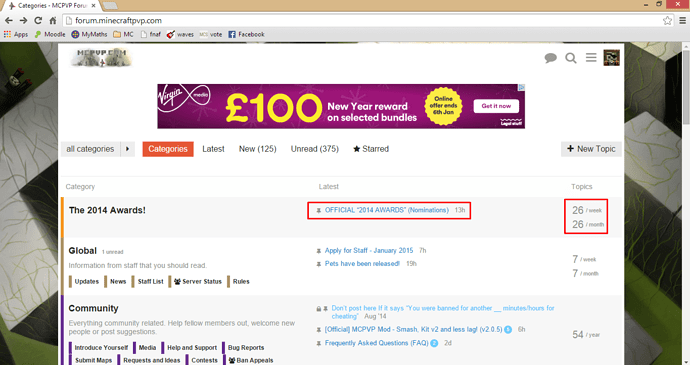 Looks like a legit bug, the numbers are cached it should be excluding those topics.

Invisible / unlisted is kind of an edge condition, this is not a permissions issue to be clear @sam.

I’m the default rank on the forums, so I can’t see the invisible threads if you need to know.

I just checked the code and we are now checking for visibility.

flag to reopen if still an issue.