Composer menu: on narrow pages, items disappear off the right side including all important OPTIONS item

The trouble is that there is so much magic hiding in CommonMark and our implementation, we don’t even have a help button for new users

We can add some kind of expando-button later. Trust me, nobody gives a

about headings or horizontal lines, and if you do, you surely know how to type them. See: Gmail.

Maybe lump them into the gear icon?

I occasionally see my users bolding text and all-caps them to make a heading… Of course none of them know to press the heading icon in the first place.

So headings are somewhat necessary, but right now the icon doesn’t seem to be any help in getting users to use it, so good riddance.

3 posts were split to a new topic: Do we need a help button on the composer?

Actually we use headings a lot, but we are specific community. But aren’t they usefull on wiki posts for an example?

If I would decide what buttons to drop, it’d be ordered list - let’s be serious, you hit enter and input next number, who needs a button for this anyway? And also emoji button seems obsolete to me, starting to type emoticons with : is natural for everyone, and list appearing then is absolutely sufficient.
Hey! I’ve got a crazy idea! What if we were to make a site setting in `Appearance tab, so every community could decide if they need only 3 buttons or 23… If I recall well, there is already a setting to enable Details function in composer (or maybe spoiler?), so it wiuldn’t be a precedent…

And also emoji button seems obsolete to me, starting to type emoticons with : is natural for everyone

Not everybody spends eight hours a day using GitHub. The program that Discourse should be copying is probably GMail, which doesn’t even have :shortcode:.

I actually almost don’t use GitHub, thank you very much.
by ‘is natural for everyone’ I meant this:
:) :D :P :O :-)
Using a colon to convey emotion in Internet is as old as email.

That’s true, but it doesn’t help you find the name you should be using.

No, but it actually opens the selector in a pop-up :

That’s the key. You (and I) are too old to remember that emojis started as text. Most newer generation don’t even know that. They just know emojis like part of the alphabet.

Nobody who used mobiles for a while will remember that a colon starts an emoji.

Okay, so you believe that when using anything with a keyboard and writing on Messenger, to put in

Yeah. A lot of people (gasp) don’t even know how to touch-type.

I was under the impression, that we are not speaking of handhelds, as they dont contain any editing toolbar at all. 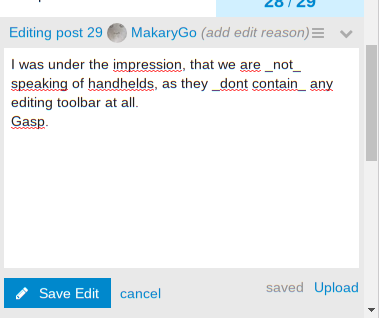 They do if you click the hamburger menu on mobile…

Which is so well hidden , that I wasn’t aware of its existence until you’ve mentioned it

Still, are we talking about mobile or about computer layout here?

It is my assumption it was primarily around desktop usage, but thoughts need to be geared towards mobile because it exists there too. The thought being, if it works well on mobile, that design should automatically work well on desktop

That is not really correct. Let’s take this poor hamburger menu. On mobile it’s a necessity, on desktop it’s a disaster. I believe that on mobile emoji button is a must, I’d like to pop it out more even, so that you don’t have to use three hits to insert emoticon, allthough I also think that on any device containing a keyboard it is more obsolete then heading.

On most touch phones, doesn’t the built-in keyboard already have an emoji button built-in?