I added some custom emojis to my forum and I’ve got two issues:

You can see in this screenshot:

I did not use any colons in the naming of the emojs, so that doesn’t explain the doubling up. The still emojis work when manually typing them :likethis: so I don’t understand why the emoji selector is doing this.

I’ve tried both the drag & drop import method and the manual upload method. Both have the same issue.

Thanks in advance for the help.

It happens here also, there will be fix soon 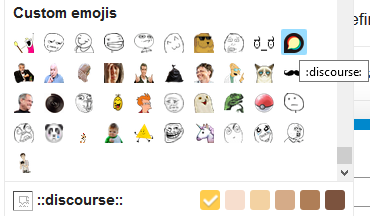 I assume this is related to these changes

FIX: allows custom groups updates to be reflected without recompilation (#9421)