there are still some things I can do to hold back the scroll event, but its all tricky.

Seems better on iPad landscape to me now.

Let me also upload an image

One annoyance is that now on mobile Safari on iPhone 6, when I hit upload it is hiding behind the keyboard, I guess you can not win all battles 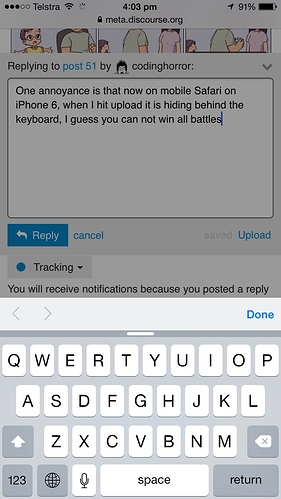 Also I need to fix it so you move around composer, it’s such a fragile beast

I think the fix for that is to have bootbox position from top instead of bottom.

its not bootbox, its a native control ios is rendering behind the keyboard in its infinite wisdom, fix is probably to ensure blur when upload is clicked.

Ok, got rid of the repositioning hack, it was fighting too hard with other hacks.

This means the composer no longer moves around when keyboard is open, it’s about as good as we can have it.

it’s about as good as we can have it.

Also in other news, this is just as broken on iOS 9

A bunch more fixes went in today, I am still able to reproduce some weird, in particular

That said a lot is fixed, uploads on mobile work again, for the first time ever you can even upload multiple files in one post

Composer window on iPhone is way bigger when typing, which is awesome

So… Progress, next up is a route transition prior to composing, but it’s going to have to wait a bit 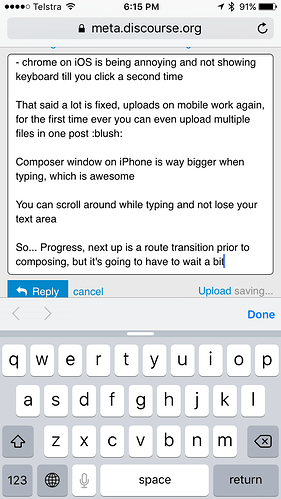 Interestingly, the latest release of my discourse installation is showing a much smaller text field at the composer as this meta.discourse.org community. It’s pretty annoying to see just about 4-5 lines. Here: 11 lines

Any clue to solve this issue?

Yep this is because it is impossible to detect size of mobile keyboard so we have to assume smallest device.

How can I change the size of the composer?

I think the composer is one of the most important modules of Discourse. The usability plays an important role, especially for tablet users.

Why is this the case? Every browser tells you how the current screen size is and the orientation is also detectable for many websites. The composer could get half of the screen size. 50% of the screen is always filled with the keyboard.

It is sometimes significantly more than 50% and sometimes less. Unless the browser can detect mobile keyboard size it is impossible to know.

You can set it how you like with CSS but you will potentially be obscuring screen on smaller devices.

Can you (or someone else) help me with a CSS snippet?

Wait a moment, do you have any screenshot of where we are taking less than 50% when focused?

Basically show me some screenshots of what you perceive to be problems with the name of browser / device.

We changed it since you worked on it, as 50% isn’t correct. Users were complaining the editor was obscured. There is no known way to determine the size of the viewport with the mobile keyboard expanded.

I follow, just interested in seeing some screenshot where it egregiously wrong, I am not sure size can be overridden with CSS.

There is a resize event that has some support, but I don’t know if it’s mature and stable enough to code for yet.

This would be the best way to show up the composer, as seen on reply:
(Notice, that the adress bar and bookmarks are hiding automatically by starting a new reply by Safari. It seems the page is expanding and therefore iOS can resolve the issue…) 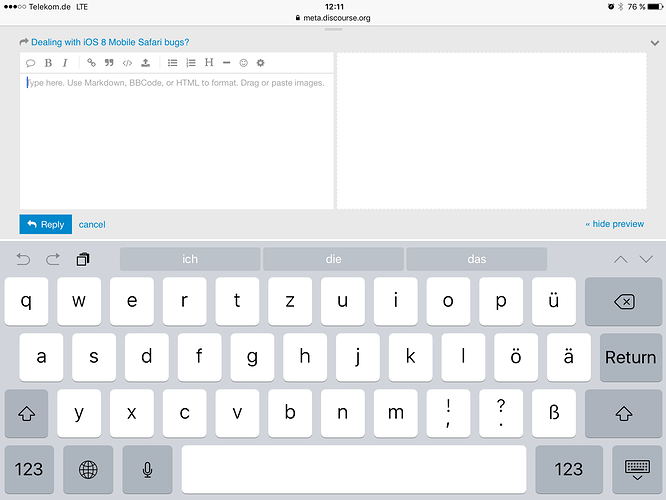 This is how it looks like at me (with tags): Terrible… 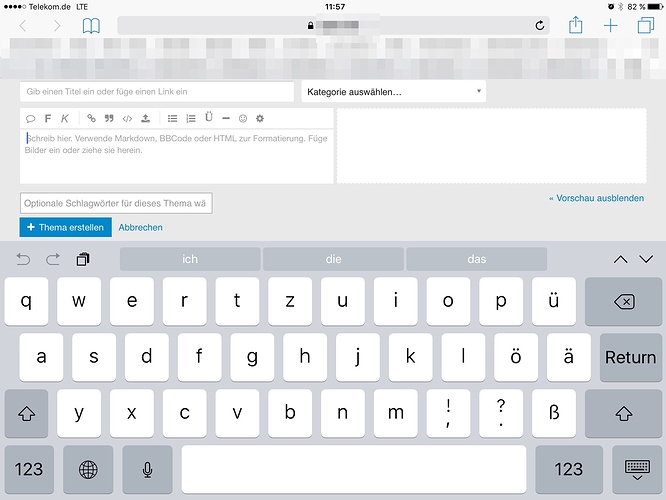 And here without tags, at your instance: 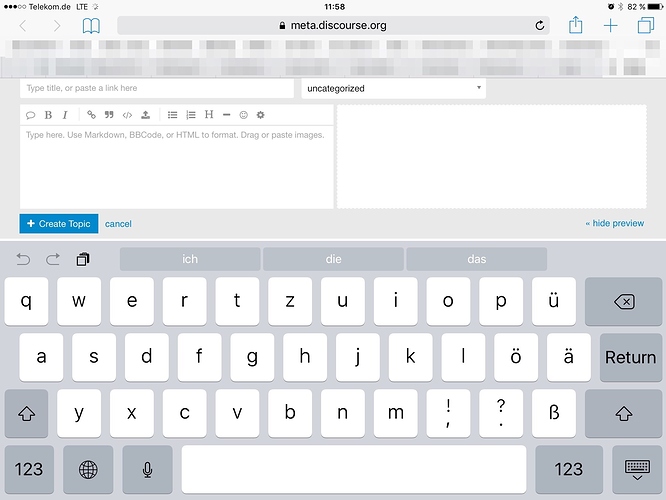 Overall, I think the best way to get more available space is, to bring the buttons and dropdown fields in a separate dialog field before/after editing.

Hmmm … this appears to overlap quite a bit with:

The composer needs to be more friendly to iPad Mini ux

I love my iPad mini. It has the perfect dimension and weight for holding it with one hand. The landscape mode is the only mode, I’m able to actually use websites like discourse. I would like some dynamic UI elements with toolbars and maybe in Word app tab style another view of the raw markup language. The default should be a WYSIWYG view. Nearly every editor in iOS is more user-frindly as the composer is. The composer is nice under normal desktop-usecase circumstances but not on mobile device…

I agree there is lots of empty spaces in “create topic” screen that should be filled up, I think a simple workaround for now is to always give “create topic” 200 more vertical pixels or something.

Maybe come up with some better visual mocks?

I think this discussion here is nothing specific to iOS it belongs in your other topic or something.

I confirmed that scroll is not going all over-the-place when you start entering text. (repro is to use iOS 10.3 in “desktop” mode, scroll down page and click on search text input)

position fixed is still somewhat finicky, but the killer bug we had appears to be gone.