Yeah, I rarely use portrait. Try landscape as a workaround for now.

Well I can confirm iOS 8.1.3 does not fix anything in this area. And 8.2 beta might not either as @BerryBlue noted. If this goes on, we will be forced to include iPad specific workarounds…

For now, I recommand Mercury browser.

This works for me pretty smoothly.

It’s because it’s using a UIWebView to display web content which is different than what the Safari app uses to render web content.

iOS 8 introduced a new WKWebView which is the same as the Safari app.

iOS has a complicated relationship with the web. And it goes back to the very inception of the platform over a decade ago.

Safari in ios8 is scrolling screen when fixed elements get focus

@iamntz -webkit-overflow-scrolling: touch; is pretty terrible performance wise, everything looks super janky. overflow hidden will scroll to top so this has other side effects.

I want to work on this next week, but its not easy. I think a full screen editor at this point is preferable on ios8

You can use it or not. I put it mostly for that momentum scrolling, but should work just fine without that.

Safari in ios8 is scrolling screen when fixed elements get focus

Thanks for making the SO post and adding the bounty @sam!

Guys, I just had an idea which may improve some stuff.

So, right now, the main problem is that when you open up the compose window, the window scroll down past the post, while starts loading stuff (on home page or categories) or just show the related topics (on topics).

So, instead of dealing with all the mess iOS does, what if this kind of info is hidden when the compose is active?

I don’t find the use of infinite scrolling/related posts not even on desktop while the compose is opened (i find it distracting, especially when i want to scroll up to a previous post then quickly scroll down to the latest one).

I have a workaround in place for Safari, grab a glass of wine, a bucket for your tears and read it here:

Oh my. That fix is scarry

The crazy thing is that it is enabled by a bunch of very advanced browser features like DOMNodeInserted, and proper handling of preventDefault. I guess we have made some advancement in the hacking department since IE6.

Reply behavior is not good on iPad with this… 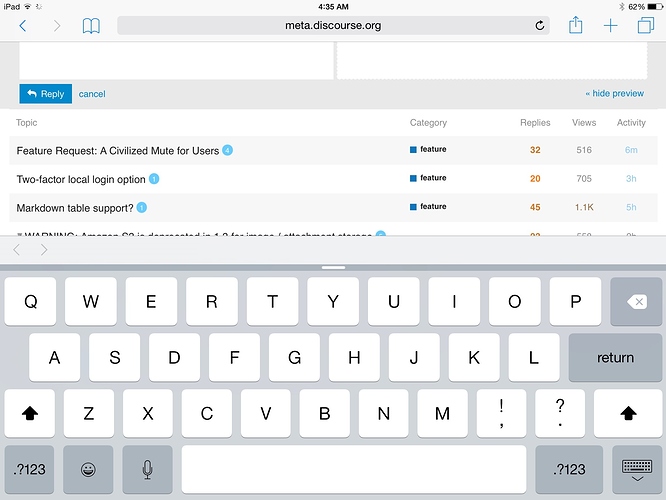 Image upload on iPad still very broken as well… What does this fix do?

What does this fix do?

I focused on iPhone first, will continue tomorrow and clean up iPad.