Some of our users are asking whether there’s the ability to delete (or dismiss) a private message. Is this something that exists? I can try to get more input on why users are asking for this feature (i.e. there inbox is getting out of hand, they don’t want a record of a discussion, etc.), but I’m just wondering if this type of featured has been discussed for now.

If they deleted the PM topic, it would be deleted for both users. (or all users if it was a group PM)

You mean essentially removing themselves from the To line?

I’ve definitely found myself needing this on other forums, but those communities were pretty trigger-happy with PMs, so not sure how useful it’d be here for all communities.

In that community, people would frequently send mass PMs to lots of people, almost like an annoying mailing list, and I couldn’t remove myself from the conversation at all. Was very frustrating.

In the above case you could mute the topic.

If you delete a PM topic, you have deleted it for all users, as I originally said…

Thx for the responses. For now, I was just wondering what the options are. I think we may just need to get users accustomed to the new behavior. Many of the users are coming from a Lithium based experience where they had a more traditional email-like inbox where they could delete messages they no longer wanted to see. I’m hoping it’s just a question of users learning that this is a more standard way of messaging on message boards.

Note that FB and Twitter both have a “delete this conversation” option within their private messages. My hunch is that users expect a level of privacy when it comes to private messages, and if that means deleting/suppressing messages so that someone who accidentally gets into their account cannot see them, that would make sense. Also, as more messages come in, some potentially spammy as @jspautsch has witnessed on other communities, people may want to try to maintain a cleaner private messages list.

I think we’ll have users asking for things that will have a larger impact on usage, but this topic may surface again.

Also, as more messages come in, some potentially spammy as @jspautsch has witnessed on other communities

Spam PMs can be flagged for the admins to delete and ban the spammer.

Is there a way to batch delete private messages? I have a user that’s been around for years, and wants to get rid of his old pm’s.

Not that I can think of other than visiting his profile and viewing his messages tab. How many are there? Note that deleting the topic will delete it for all users involved in the pm though.

The user that’s asking has well over a thousand pm’s. I’m sure that he won’t want to go through them individually and flag them. Thanks.

Is there a way to “uninvite” myself from a private conversation? Maybe in the top trust levels? This way it would look like I deleted the topic from my feed, without deleting it for the other participants.

I do not think it is currently possible for a non-mod or admin to remove a user from a PM conversation. As suggested above, you can mute the conversation so you do not receive notifications about it.

It would probably be nice to have an ability to delete private messages, wouldn’t it? I mean, from the users’ POV. I understood from a few topics I’ve read the problem of when another user in the PM “topic” sends a new post. Couldn’t just the “deletion” requests be stored with the post number, and you mask the topic until this post number for the user (=mask totally the topic if there is no higher post number in it, or show only to the user the topic with posts starting from there).

Ideally, there would be somewhere a real deletion when all the users of a topic have requested the deletion of all the posts (maybe even something triggered manually on occasion by the admin).

In Discourse, PMs are topics limited to specific users. So, as discussed above, deletion doesn’t make sense except by staff. If one user were to delete the PM, it would be deleted for everyone in the PM.

What individual users can do is remove themselves from the PM. To do this, select REMOVE under the usernames below the OP, then select the X next to your own username. You will then be prompted with Do you really want to leave this message? - select OK and you will no longer have this PM in your messages.

I agree the UI for this is a bit clunky - maybe we need to make it easier to discover this functionality so people can more quickly opt out of PMs they just never want to see again and practice “inbox zero” also on Discourse.

Ideally, there would be somewhere a real deletion when all the users of a topic have requested the deletion of all the posts (maybe even something triggered manually on occasion by the admin).

This is possible. Just flag it for moderator attention, using the “Something else” option. There users can tell the moderators to delete the PM.

What individual users can do is remove themselves from the PM

Great. Just duplicate this function outside of the PM and call it “delete”, maybe? With the ability to do it for several PMs at once?

I get the feeling there may be a problem of POV here. All you say is great and makes sense from a “developer” POV (the “Discourse” / admin / tech guy / etc. POV). I’m not sure it makes much sense from the user viewpoint. And maybe there is a need to “translate” this in something more understandable for the users (without needing constant explanations). I can foresee the confusion and psychological discomfort with this.

I tested the “remove”, and yes, seems to work perfectly. But if you do this in a 2 participants PM, the message disappears on your side, but not the other participant’s side, correct? What happens if the other person writes a new post in this PM? Don’t we circle back to the initial problem of why we “can’t delete”? (I would assume you don’t receive anything as you removed yourself, but what happens on the other side? An error message?)

Wouldn’t my above suggestion work? Simply keeping track of the last post of the PM when the person “deletes”, and start from there if there are some new posts. (That would indeed be different from “remove”. There may be 2 different actions wanted: Deleting, and not wanting to receive any further message. The latter being especially helpful in a multiway PM. You may want to do this and keep the message. It may come as a surprise to have all the information disappear as you just wanted to remove yourself from any further discussion, no?).

Thanks for testing. I agree the UI is confusing for non-staff and can be improved, and mentioned this to my colleagues. Fundamentally, though, I think the PM system is solid. We are not seeking parity with gmail here, and we don’t need an overly complex system.

Great. Just duplicate this function outside of the PM and call it “delete”, maybe? With the ability to do it for several PMs at once?

This is a great idea.

Though I’d use Leave instead of Delete because of the reasons discussed.

To be honest, I think most communities should not be using PMs much at all to have substantive conversations. If you see this happening frequently with the same people getting together to talk privately, then you probably need to look into creating more private categories to pull certain people together. You don’t want your users talking in PMs where moderation and enforcing community guidelines can be a challenge. And where all that great engagement is locked away where other members, current and future, will never be able to benefit.

I tested the “remove”, and yes, seems to work perfectly. But if you do this in a 2 participants PM, the message disappears on your side, but not the other participant’s side, correct? What happens if the other person writes a new post in this PM? Don’t we circle back to the initial problem of why we “can’t delete”? (I would assume you don’t receive anything as you removed yourself, but what happens on the other side? An error message?)

You might be overthinking this a bit. The other user(s) still in the message will know that you left, which is fine. See screenshot. They can keep talking if they want, or leave the message as well. Or not, as they see fit. 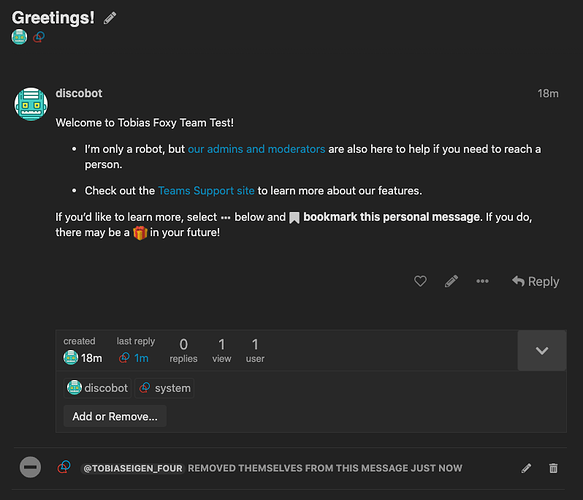 Though I’d use Remove instead of Delete because of the reasons discussed.

Sure, if the system stays the way it is, that makes perfect sense.
Inside PMs, if you want to do something in term of UX, I guess some sort of “Remove myself from this discussion” at the bottom of the PM, could be an idea.

Ok, thanks for the screenshot. And yes, I tested it in real conditions as well, and I saw this. Let’s say there may be a very small chance the last person doesn’t see the mention his last interlocutor left and he keeps talking to himself

Seems to work fine to keep talking to … nobody

See it as overthinking if you want, but I don’t like very much the “removal as delete” (or removal in order to delete, rather), because it notifies the other person(s) (I’m especially thinking of 2 persons PMs here). The latter may ask himself WHY the removal (“is he mad at me for something, or what?”).

So, I’m not totally sure my above suggestion for “mass removal” is really a good one

(maybe this post suggestion is better. With an addition: Maybe state in the confirmation popup that the other participants will be notified?).

Ok, thank you so much for your time, Tobias. PMs ARE topics. The first rule of Discourse is: There is no deleting PMs (because topics). “But there is removing oneself for deleting” => Meh

Deleting shouldn’t affect anybody except yourself. => The second rule of Discourse is: There is NO deleting PMs. You archive them if you want to. That’s it.

Having just migrated our community to Discourse, I’ve had a number of requests to be able to “delete” PMs. Reading this thread, I support the idea of being able to bulk “Leave” the conversation, especially as an action button when selecting multiple topics from the archived messages section.

I feel like, as a threshold for action, I’d like to understand why the Archive section is insufficient for people.

The Archive button didn’t exist at the time this topic was created, and it removes messages from the Inbox view, allowing you to get to Inbox Zero. It seems like it should be enough to satisfy people wanting a clean list.

After my initial ideas on the subject, I arrived to the same conclusion: Archiving is fine.

I guess there would even be a pretty simple trick for those wanting some delete: With CSS, mask the archived section and rename the “archive” action into “delete”. Boom, you’ve just create a deletion of PMs. The only thing is that they may reappear if a new post comes in (the initial idea there was to mask the discussion until the post when you did “delete”, so you wouldn’t notice what you’ve deleted wasn’t actually deleted). => That could maybe be done with a plugin if some people do want some PM deletion ability.