A frequent request, we’ve upgraded Font Awesome from version 4 to version 5, supporting many new icons, including a personal favorite of mine. In addition to all the new icons, this update now uses SVG icons instead of a font,

Due to the large number of icons, we no longer ship all FA icons by default. Additionally, custom themes and plugins which use FA icons will need to be updated. For the complete technical details, see Introducing Font Awesome 5 and SVG icons. 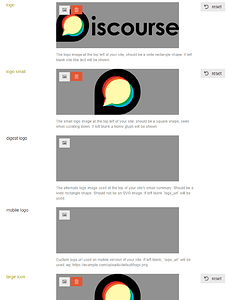 At the same time, we recognize that admins have used the URL method for years, and have procedures in place that assume a URL. For more discussion and some suggested new procedures, see this topic.

Beta5 includes a number of mobile focused improvements. Previously topic titles were only visible on mobile when scrolled completely to the top, or by opening the timeline. We now show titles in the header when scrolling, just like on desktop. Due to the limited space we’ve hidden the menus from the header. To access them simply scroll up a small bit.
Additionally, we’ve added a new site setting short title that is used on mobile home screens and app drawers when using a PWA, making it clear for users which site it is instead of a cut off title like Disco... 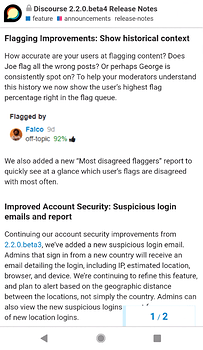 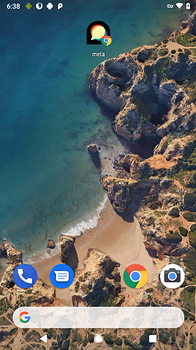 If two users attempt to edit the same post at the same time, one edit will overwrite the other. To help prevent this, we now show an edit conflict warning in the composer.

If you use Discourse like we do as our primary communication tool, chances are you communicate with users “via email” in a group inbox. This works great, but email isn’t perfect and sometimes messages bounce. Bounced emails are logged in /admin/email/bounced, but there’s no notification. Now, if whispers are enabled, a whisper reply will appear right in the PM, along with the full error details. 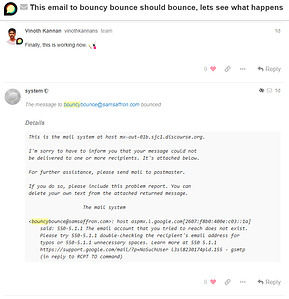 Discourse ships with default terms of service that govern your site’s users. They were originally adapted from the WordPress Terms of Service, but have now been rewritten from the ground up. If you previously modified your ToS, they have not been modified by this change. You can see the new terms in our translation file if you wish to copy them to your site.

Do your users like to reply to themselves in a topic over and over again? Or reply to different users each as a new reply instead of quoting? Discourse now limits users to no more than 3 consecutive replies. If the user attempts to post more the reply will not be posted, and they’ll be instructed to edit their last post instead. The maximum number of consecutive replies can be modified via the max consecutive replies site setting.

This beta includes 2 security fixes for issues reported by our community and HackerOne.