We will shortly merge into master a branch that upgrades Discourse to Font Awesome 5.5.0 (the free version) and switches to using SVG icons instead of an icon font. This is a substantial change, with lots of benefits, and one significant change for developers.

Here is a quick rundown of the changes:

Below, you can find instructions on how to update plugins and themes to use icons from the new set.

Font Awesome 5 has introduced many new icons but also some naming changes. For a full discussion of the changes please see the Font Awesome upgrade documentation. The main change is that icons in FA come in separate styles now. There are three styles:

To allow bundling the three styles into one SVG sprite, icons in the regular and brand styles in Discourse are converted to far-icon-name and fab-icon-name internally. Plugins, themes, group flair and badges can use the standard FontAwesome 5 naming convention. Site admins adding icons to the set via the svg icon subset site setting must use the internal naming convention.

Developers: how to use or add an SVG icon to your plugin or theme

If you would like to have more icons than what’s available in FontAwesome, you can add your own SVG icons in a plugin or a theme. See this SVG sprite for an example of how to structure your sprite. (It’s essentially a list of <symbol> elements, each with its own unique ID.)

In themes and components: add the SVG sprite in the /assets folder, and reference it in about.json using the variable name icons-sprite. For a sprite called my-icons.svg, your assets.json should include this:

You can also add the SVG sprite to a theme or component via the UI, when doing so, make sure the SCSS var name is set to icons-sprite. Screenshot: 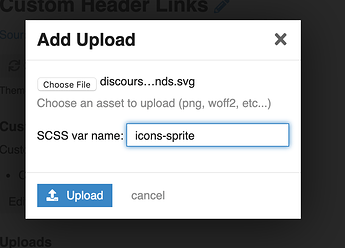 In plugins: simply include an SVG sprite file in the plugins/your-plugin-name/svg-icons folder. Restart your server (if in dev) or rebuild the site if in a Docker container and your custom icons should be automatically available.

To avoid any potential clashes with FontAwesome icon ids, you should prefix the ids of the custom icons in your plugin or theme.

Could someone elaborate on how to update a theme component? I’m very green at this and haven’t been able to make sense of all this. I’m currently using as such:

This may be unrelated, but the following css has broken since the latest build:

As you can see here, only this one icon has broken, I double checked and f1ea is still valid in FA5. Is there a better way to achieve this with the new changes?

From what I can see all of the icons are broken:

Hmm interesting, they must be cached on my side. Is the option of using this gone now @pmusaraj?

For HTML code directly, you can replace:

Note that “arrow left” is in two places, in the class and in the <use> tag. Also, this icon is in the solid style in FA5, but for icons in regular or brands, you need to use the prefixes far- and fab-, respectively.

In your header links, you can’t use :before anymore, because SVG sprites can’t be added to pseudo selectors. But you can use this component: Header submenus (it’s been updated recently, and is FA5-compatible).

How can I change this code to work with Font Awesome 5?

What is creating this a[href="/new"] element? If you are adding it in your theme, via JS, then it’s easier to add the icon there, instead of using the CSS pseudo selector. One of iconHTML or iconNode above should do the trick.

I’m very confused. I tried this and it worked:

But when I switched “left” to “right” in both places, it didn’t work. Am I missing something? Here’s the code I tried:

(I was actually trying to get the church icon to work, so if that’s going to require something else, let me know.)

The arrow-right icon is not included by default (because it isn’t used elsewhere in Discourse), so you will need to add it to the svg icons subset site setting. Same for the church icon. (FA5 comes with thousands of icons, so we use a subset to avoid loading all the icons all the time. It saves precious bytes

Makes complete sense. Thanks much.

The arrow-right icon is not included by default (because it isn’t used elsewhere in Discourse), so you will need to add it to the svg icons subset site setting. Same for the church icon. (FA5 comes with thousands of icons, so we use a subset to avoid loading all the icons all the time. It saves precious bytes

I was banging my head against the wall trying to figure out why the right arrow wasn’t displaying last night! FYI I don’t if this is because it is a work in progress, but the instructions say to use far but this did not display the icon, I had to add it as fa-right-arrow for it to display.

Sorry about that, I have updated the description text for that setting to include: “Use prefix ‘fa-’ for solid icons, ‘far-’ for regular icons and ‘fab-’ for brand icons.”

But I’m doing something wrong and it’s not working.

We are no longer using Font Awesome as a font, so using the old method of pseudo selectors in CSS will not work.

If you don’t want to touch javascript and want a CSS-only solution, you can use an SVG as an image:

I’ve hacked my way through this and I’ve got everything working again except the right arrow on my mobile navigation component for the app, I can’t get it to right align to save my life. I tried using flex with flex-end to no avail. Please forgive my horrible attempt at this…

Here is my components code:
/body

If anyone wants to help, my site is here and this component only displays below 1024px obviously. The left arrow looks perfect and the right arrow should mirror this.

It’s because you’re using position: fixed on the arrow, if you add

Then it should be where you want it.

Sidenote: You don’t really need to use position: fixed for those arrows at all because they’re already within a fixed container, if you put the arrows inside of your a tags containing the “forward” and “back” text the layout might be a bit easier to manage in general.

If you don’t want to touch javascript and want a CSS-only solution, you can use an SVG as an image:

I’m trying to use this with the Brand Header Theme Component but not having any success with this:

Something is wrong with your SVG image. The screenshot below works with the Discourse logo, but not with that SVG file: 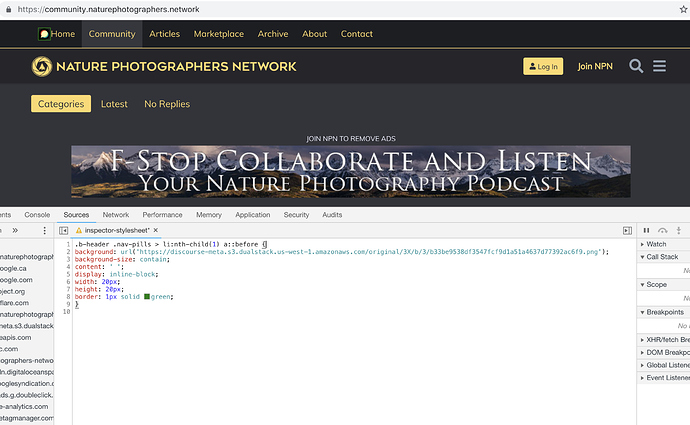 It might be because the SVG doesn’t have any height/width defined (in the SVG markup itself, not the CSS)

Can you right click this one below, save it, and try again… I’ve added some dimensions to it.

This does seem to work, dare I ask how? Also, fill: does not seem to work on this to change the color, it just displays as black.

For reference, my code: