I experienced some (for me serious delays) in the rendering performance. For example this thread in the syncthing forum: SSL Certs discovery v4 vs v6 - General - Syncthing Forum.

I use the chrome on samsung s4. 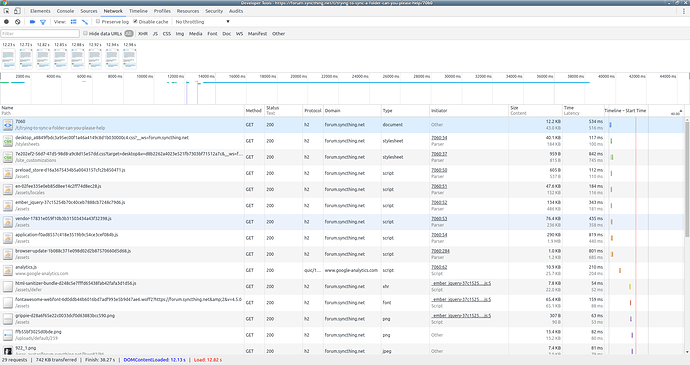 (screenshot of developer tools), rendertime ~11s, without js ~1s (at home over wlan)

I can be wrong but on a early 2013 phone, with 1.5GHz processor this is bad but kinda expected?

This phone has been 3years ago an high end phone. What is the phone distribution here on this site? Maybe there are less powerful phones.

Mobile design is IMHO not only about the responsive layout. It is also about speed/bandwidth and hardware limitations on these devices.

You can see there is timerange with 100% cpu.

P.S. forum.syncthing is the fastest

P.S. forum.syncthing is the fastest

Well, you have to take into account the speed of light here.

You are comparing the speed between Frankfurt

This tests are using the chrome emulation, and not real devices too.

This gives 7s with a cold cache.

Discourse is working on improving this:

For several years now we’ve tracked the fact that, over time from 2012 onward, Android JavaScript performance has become wildly divergent from iOS JavaScript performance. And not in a good way. To give you an idea of how divergent it has become, try: http://emberperf.eviltrout.com Complex list Ember 1.11 This is the benchmark most representative of Discourse performance, and the absolute best known Android score for this benchmark is right at ~400ms on a Samsung Galaxy S6. That doesn’t seem …

ok, so you know about. I currently switched to the js-less version. At this point an app makes sense … a lot!

As of June 2018, Qualcomm has semi-competitive (iPhone 6s territory) hardware with the Snapdragon 845. It looks like their new release coming in 2019, the Snapdragon 855, will be close to iPhone 7 performance.

We do have to wait for the vast bulk of old Android devices to cycle through the market, unfortunately. I expect that will take another 4 years.

For example I’m rocking a Pocophone F1 which costs $299, has the Snapdragon 845, and it’s a breeze to browse Discourse using it (I do it everyday

Anything at Snapdragon 845 level or higher is going to be very solid for Discourse.

i have a few users on android phones using the chrome browser complaining of slow site loads, only very recently, one since the last upgrade only. Anything changed which might effect this?

Make sure you are on latest, if you are behind a reverse proxy or any other weird proxy like cloudflare, there was recently a bug that prevented fallback from brotli to gzip from working. And that’s excruciating given the resulting payload file size…

Everything up to date and no CDN or proxies involved. Working fine on my iPhone with safari. Anyone else having similar issues? Only plugin i have is the ad one and I’m not even using it currently.