Signing in a cheap Android (motoE5, in this case, Chrome browser), the email column is not visible; it’s covered by the chrome header.

Edit: My apologies, I meant only signing-up.

I just tried a Moto G which I think is a similar resolution (second gen, 720x1280) and I’m able to scroll a little to complete log in (I also tried with social logins enabled)… can you provide a screenshot so I can see the problem more clearly? 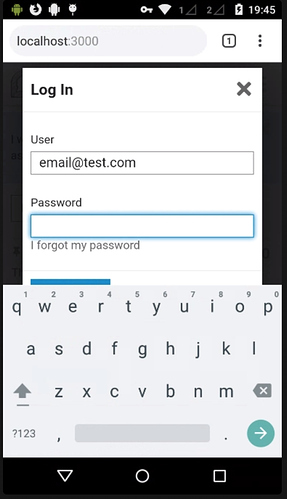 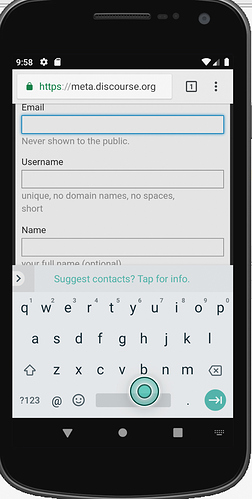 I also have a very, very cheap Alcatel Android device, and the “Email” label there is even further hidden below the Chrome header.

Ah, just noticed that the OP mentions both “signup” and “signing in”, I had no issues with the sign in screen.

Which site are you signing into? Does it happen here on Meta too?

Thanks all for checking this out.

As I noted in my edit to the original post, I misspoke, this occurs on sign-up, not sign-in.

Here are some screen shots. It occurs on both Firefox and Chrome on our Discourse site, but interestingly not on the sign-up here, on Meta - it’s close, but the page aligns slightly down. Our site, if you’d like to test, is discuss.uplift.us. We’ve kept up to date with all the Discourse updates, and haven’t applied any custom styling yet.

I’ve found that the moto e5 generally displays sites the same as an iPhone 5; I don’t have one handy to test, but I wonder if the same might occur on an iPhone 5.

Our site (This is Chrome, but it’s identical on Firefox): 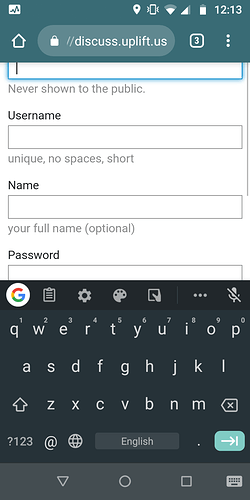 Sorry, had to put this in a separate post.

Here’s how it looks on Meta. 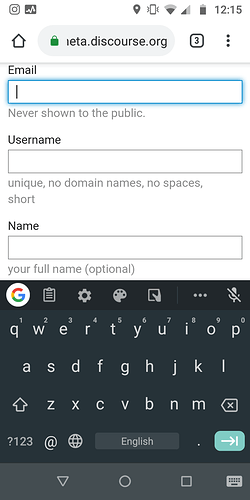 Was able to reproduce the issue and added a fix here:

I originally couldn’t see the issue because I was testing with the default modal, but this only occurred when custom fields made it taller than the viewport.

Thanks so much, @Kris! That’s wonderful, we really appreciate it.