I thought of a way to help to reduce the number of unnoticed duplicate accounts that suspended users are creating and I’ve attached a quick mockup below. The idea here is to have an exclamation mark (or anything else along the same line) that indicates that a user has another account linked to the suspended one. This makes it easy for us to see if suspended users have a duplicate account at a quick glance. 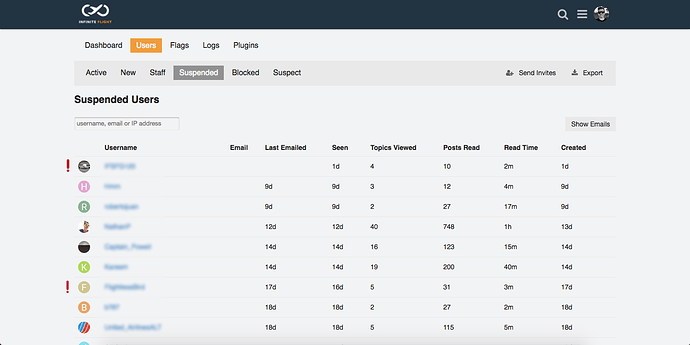 This is a rough sketch and improvements can certainly be made. I’m looking forward to your feedback!

How would you describe how this differs from the Suspect list?

A question: how would you handle accounts that match different users (and one of this users is suspended) but using the same IP address?

I had a look through the suspect list on our forum, and it didn’t seem relevant to our request. The exclamation mark would only be present for suspended users that have a duplicate account linked to the suspended account IP.

Doesn’t the suspect list track users that join the forum but have no activity?

Thanks, I think I’ve got it.

This is like going to individual member accounts’ page’s and checking the IP, except the existence of possible misbehaving multiple accounts are all on one page visible from the start.

Yep, the point is to reduce the amount of time we need to spend checking people’s IPs. We have over 200 users suspended and checking each suspended user for a duplicate is extremely time-consuming. This is a little feature that would make it easy to identify which user has a duplicate account without having to go to individual profiles and checking from there.

Reading through this, just trying to get an idea of what determines it to be a duplicate? Is it, it must share an IP address of an already suspended account? Are there any other factors that must be met?

We haven’t thought of any other factors other than a suspended account sharing an IP with a duplicate account.

As far as “multiple accounts that haven’t misbehaved yet”, quite a while ago I looked into this as part of a browser extension. Both the SUM and length() approach slowed things down to the point of detectable grind.

The closest I came to having anything acceptable was a “this IP compared with the previous IP in the list”
I.E. sequentially registered accounts having the same IP with +/- margin of error.