all the invitation and digest and notification emails are ltr for Persian, and in a bad form as a result. Is there any way to fix this?

The fix for the digest is simple. I can make a pull request for that. The fix for the other emails (signup, forgot_password…) is a little more complicated because they are derived from templates, but the template isn’t wrapped in anything that you can give a direction to.

Thanks Simon, and yes the notification emails are rtl as said.

the fix for digest would be great as the digest content are something you give to users directly! and you’d rather it be as clean as possible.

the invitation emails are more or less important as they are an invitation!

but it seems they fit into the other complicated group, aren’t they?

They can be fixed with a simple plugin. I can make something later this week.

I haven’t had the time to do this yet, but I’m starting to work on a forum that will need it to work. I’ll get it done soon.

Is there a way to remove the user name in the emails and only contain the full name which can be other characters rather than English?

Is there a way to remove the user name in the emails and only contain the full name which can be other characters rather than English?

That could be done with a plugin. I’ll see what I can come up with.

[quote=“Pad_Pors, post:6,
topic:41972”]
the emails for rtl will be messed up when there exist English characters.
[/quote]

What is the convention for writing English (ltr) words or phrases inside of a Persian (rtl) paragraph?

That could be done with a plugin. I’ll see what I can come up with.

What is the convention for writing English (ltr) words or phrases inside of a Persian (rtl) paragraph?

i’m not sure if i got your question correctly, do you mean something like this? 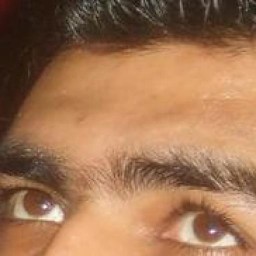 Why words are shuffled when I insert English words in any Arabic/Urdu/Persian text on Notepad or MS Word?

if yes, an answer from the stackoverflow which seems to work is:

if you’re asking something else, may you explain more?

Sort of. What I am wondering is, what is the proper way to format English words that occur inside of a Persian sentence? Maybe it doesn’t happen very often

I’m guessing something like this but using English glyphs for the English name only.

What I am wondering is, what is the proper way to format English words that occur inside of a Persian sentence?

if these two html tags exist in the style, everything goes well with the Persian sentence, even when there exist an English word.

so far, i couldn’t find any other answer for the above question

p.s.: in customizing the emails i could use bold-tags with ** word ** , is it possible to use the alignment tags somehow as well?

Is there any update for this bug @simon

My digest emails are still improperly formatted and I don’t know what to do about it.

It’s possible to add a @dir property to UserNotifications::digest. The @dir property can then be used as a switch for changing all the text-align values in the template. This isn’t very complicated, but it’s slow to test and would have to involve the Discourse team.

Another approach that might be safer would be to include a separate digest_rtl.html.erb view. That way this could be developed without having to alter the current digest.html.erb view.

If that can’t be done, maybe a way could be found to override the digest template with a plugin.

especially if there exist an English word in a sentences (which is very probable).

So the problem here is if we create a digest_rtl.html.erb file which is pretty easy and straightforward, How can we make use of it in the core? If someone from the discourse team would help answering this question, we can move forward.

I’ve done the following PR. Worked fine in my development environment. Hope it would help.

This is a screen shot of the preview 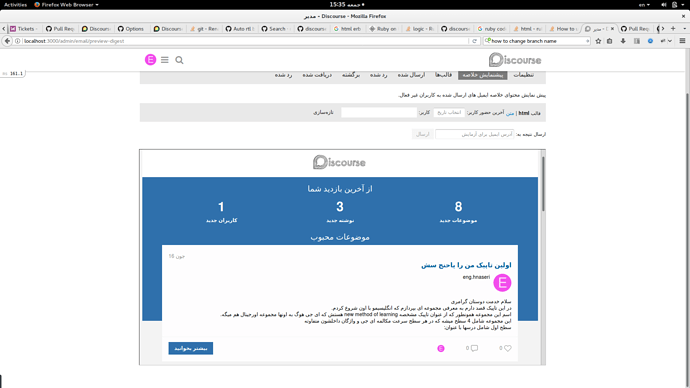 Thanks @hnaseri. I merged your fixes.

Thanks @neil for the merge. Now we got a nice looking digest email

Are there any other email templates that might have RTL problem?

Can the site-font be added to the digest email as well?

p.s.: I’m not sure if fonts are related to the email provider (e.g. yahoo or gmail) or email sender (e.g. the forum). forgive me if the question doesn’t make sense!

Are there any other email templates that might have RTL problem?

Can the site-font be added to the digest email as well?

I think not as far as I know. Never heard of custom fonts in emails. So even if it would be possible, It seems its not a good idea.

If someone point me to all email templates, I’m willing to take a look at all of them.