This is a regression that I think has happened within the last 24 hours on the https://community.drownedinsound.com boards. Apologies if it has already been raised / addressed, I searched and couldn’t find anything like it.

It’s a spacing / layout issue that seems to be affecting polls and more specifically their results. As you can see in the screenshot below (Windows 10, Chrome Version 68.0.3440.106 (Official Build) (64-bit)) there is excessive spacing around the avatars of the voters. This used to be relatively condensed, but now seems to have more padding than is needed which is most noticeable in the space between each avatar of each user who has voted. The zoom in this screenshot is 100%. 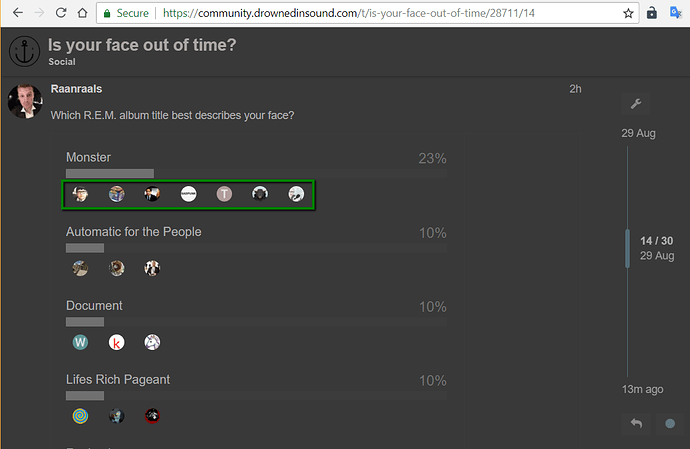 I have also loaded the site on my Samsung Galaxy S7 Edge running Android version 8.0.0 baseband G935FXXU2ERGC and have seen the same problem there too.

Can you check please? If you don’t have time let me know, I will fix it.

ah yes, that was my fault – one of the styles was too generic. Thanks for reporting @ma0sm.