Group activity page has no name or title for the posters

I’m just in the final stages of pimping out our new discourse forum.

On our group activity page, though, I noted that we do not have any information on ‘who’ has made the posts, which would be super useful (ideally the username and their title would be displayed)

An example can be seen right here in the official discourse board: 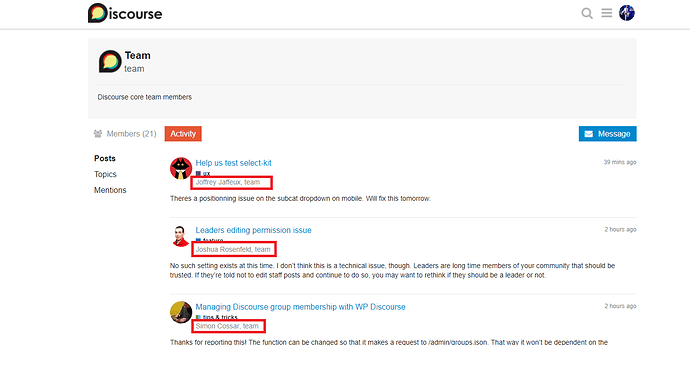 can anyone point me to where I can enable this, or what CSS / HTML I need to edit to make this happen?

Here’s how our page looks for reference: 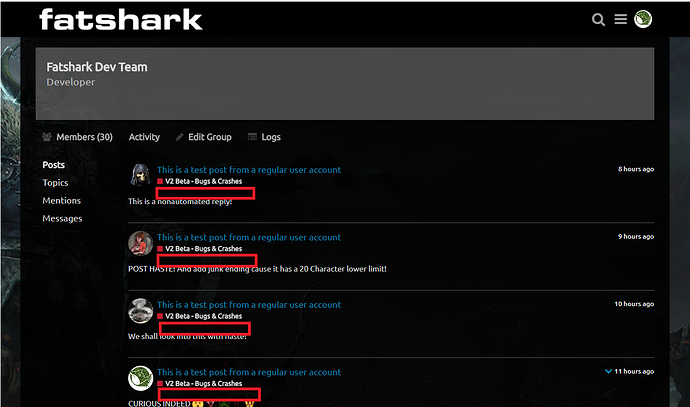 Edit: also the logo would be pretty nice to have, just like the discourse logo beside the group name

Perhaps @dax can answer this?

can anyone point me to where I can enable this, or what CSS / HTML I need to edit to make this happe

I did some checking.

Name and title are displayed in that page only if the name has been entered in the user profile. Then in the site settings enable names must be enabled and the members of that group should fill in the name on their profiles. On our page for example, all except HAWK have name and title displayed. Indeed, Hawk has no name on her profile. I do not know if this is a bug or a desired choice, @tgxworld?

Edit: also the logo would be pretty nice to have, just like the discourse logo beside the group name

Just fill in the Avatar Flair Image field on the group setting page to view the logo.

That’s amazing @Dax - thank you so much! Quick one more, enabling the logo also enables the logo beside each group member avatar within a topic reply. I’m trying to hide this via CSS only within topic replies, but struggling. Could you assist perhaps with that?

Ah, turns out I had hidden the entire avatar, instead of just the flair seen to the bottom right of the avatar.

Curses. Any one knows I would be hugely appreciative.

An example of this can be seen on the eve forums:

As we move forward toward the February Release, and the coming of Upwell Structures 2.0, there’ll be lots of changes appearing on Singularity over the course of the next few days. Team Five-0 have been hard at work putting together a long list of...

The poster has no flair to the side of their avatar, but their group overview page has a logo, so it must be doable and I’m just being stupid!

Ah, turns out I had hidden the entire avatar, instead of just the flair seen to the bottom right of the avatar.

Curses. Any one knows I would be hugely appreciative.

You do not have to do anything with CSS, delete what you wrote. Instead, disable the group configuration Automatically set as primary group. Flairs are shown only on the primary groups.

The poster has no flair to the side of their avatar, but their group overview page has a logo

Which group? I do not see any logo: 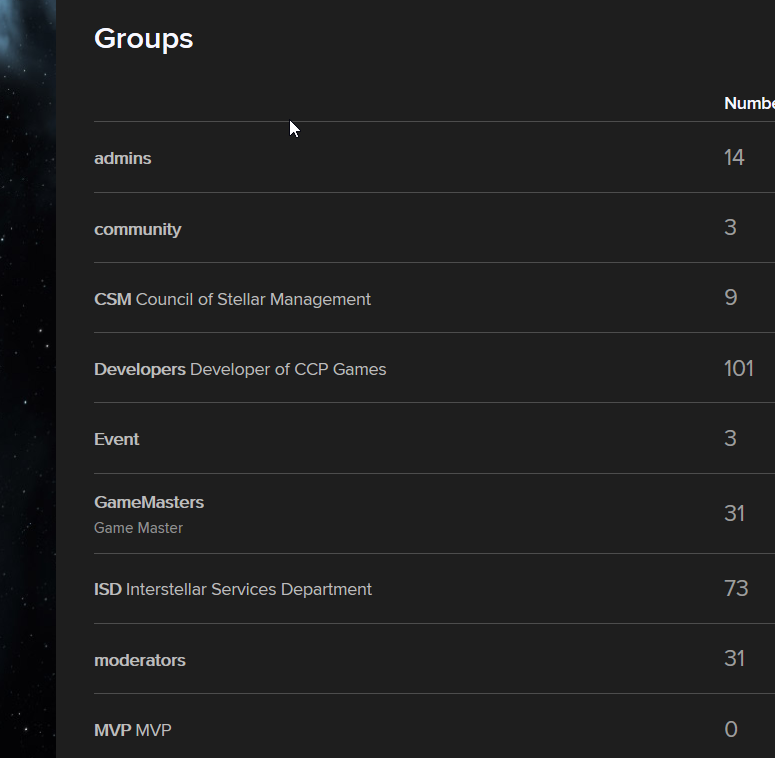 Make a screenshot of the logo you’re referring to, maybe we’ll talk about two different logos…

It’s possible I’m crossing wires, I was very sleepy! So I messed up my example above, ignore the eve forums I linked.

We make video games and have different departments, we are running this forum as a closed test forum which is invite only.

So I have some default groups set up:

Everyone with a company email is automatically added to the Developer group. The Developer group is “automatically assigned as primary” to anyone with the business email address. This makes sure they get appropriate trust levels and nifty flair I hacked in to the category overview without me having to do anything manually (which is nice!) (fig 1):

In order to get the logo on the Developer Group Overview page as per the Original Post above, I have had to assign an avatar flair to the Developer group, only - this creates a flair on the avatar of each post the developers make (fig 2)

What I am trying to achieve is hiding the avatar flair on the posts by the developers, but keeping it on the group overview page.

I thought it might be possible by hiding an element in CSS, but I ended up hiding the entire user avatar on their posts (and not just the flair).

I’ll show you an example of what I am after:

Is that possible by hiding any CSS elements? Am I just being super picky? (You can say yes!)

Since the developer group is a primary group you can do it.

Open your browser console and inspect the flair of a member of the dev group. You will see something similar: 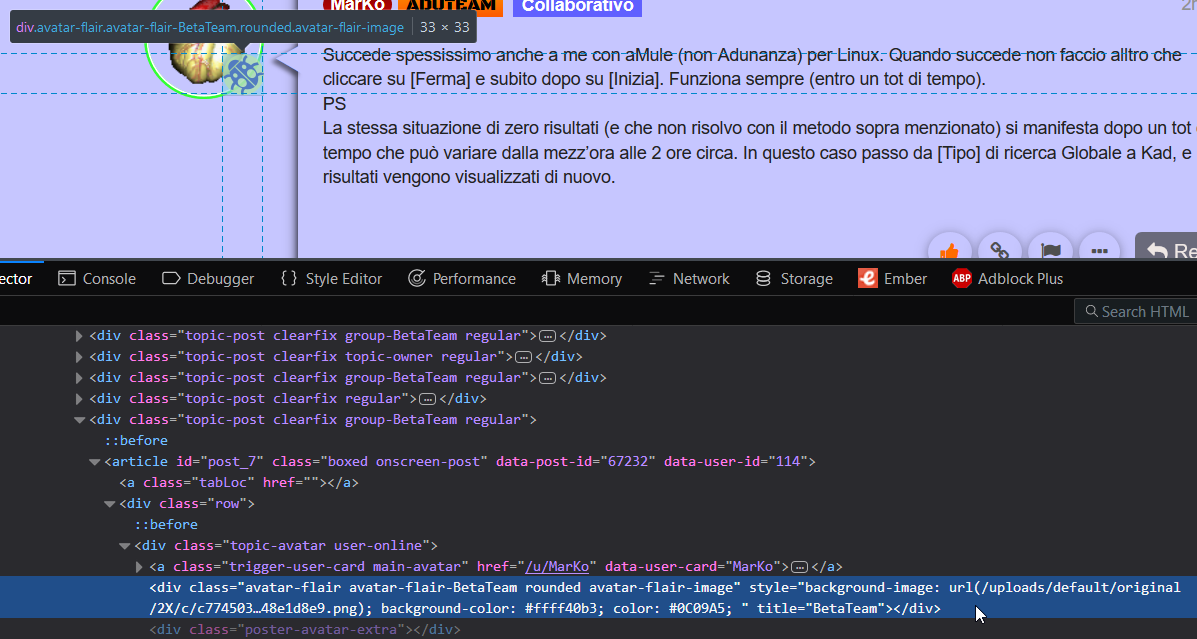 The class you have to use to hide the flair is:

so to solve your problem:

where obviously, in place of Betateam you will find the name of your group.

I don’t see the .rounded, just:

but adding {display: none} hides the logo from the group overview page as well

Heroic! That absolutely did the trick. and I’m learning how CSS actually works - amazing stuff Dax - thank you so very, very much!

Actually, I would like to know the true group activity.

As I see, when I’m in the group page, the group activity actually is all the “group member’s activity”, not the group’s activity.

You See, I’m in many groups(This is a learning group website, so we have many many groups).

What I want to see is the category which the group have rights.

So when I view the group A activity, I only want to see the CategoryA activities.