We just migrated to Discourse and so far we’re loving it. I’m running into an issue using Groups efficiently and wanted to ask for help with a setup that doesn’t overcomplicate things…

We have a coaching program with 2 groups of membership.

When I was on Slack, there would be 2 separate workspaces.

Trying to mimic this with our Discourse using Groups and I seem to be confusing myself.

Picture of the current set up below.

And I’m trying to make the Scale Portal a place where it’s just content for members of the higher tier, and the Scale Private Channels where they can access their private channel.

Anyone have any feedback on how I could get the same setup without making a mess of Groups? 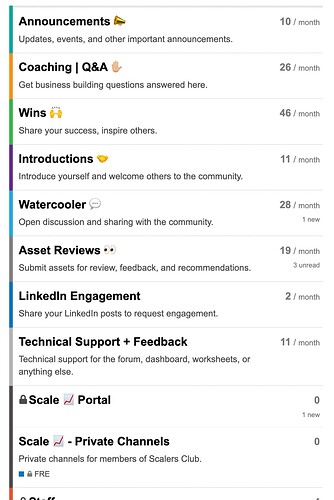 It sounds like you’re doing groups correctly, you just want to modify the security settings of the Categories:

So in your case, it sounds like you have two main groups:

For all Categories, you can remove “everyone” and add Scale. For the lower tier content you can add Accelerator as well. 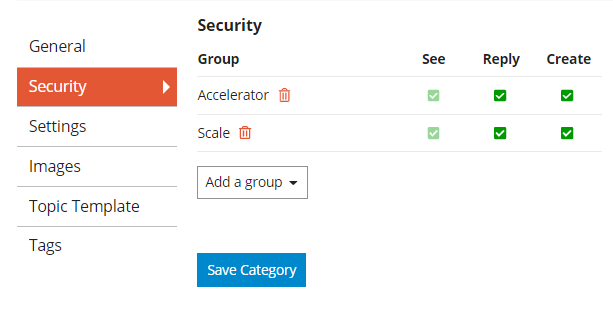 Thanks, @Tris20. Much appreciated,

And within Scale, if I want people to have their own private Category to engage with me and my team, I need to create another Group for them and do the same? So people with a private Category would be a member of Scale and then their own Group?

I’ve got all this set up as described, but haven’t figured out the private channel piece. So far looks like members of the Scale group need to be a member of their own group as well if they want to have a private channel. If anyone knows another would would appreciate it. Was trying to avoid a massive amount of groups later on, but guess this is the tradeoff.

And within Scale, if I want people to have their own private Category to engage with me and my team, I need to create another Group for them and do the same?

If I understand this correctly, you want a Category that has access for Scale members and your team? If so, then

For the second part it look like maybe you’re asking " How do I allow members of Scale(but not Accelerator) to contact my team individually." Is that understanding correct?

Basically, lowest tier membership is Accelerator. They only have access to Accelerator stuff.

The higher tier has access to all of that as well, plus another category just for them.

We’ve set that up with 2 groups and assigned accordingly.

But the part that’s been a challenge has been that members of Scale also need to have a private category to get support from my team - apart from other members of that group. There’s sometimes pro proprietary stuff at their level they don’t want shared in the group environment.

So I think that means members of Scale need to be part of the Scale group - plus - their own group to get access to a category that’s only for them.

Is that right? Appreciate the help.

The scale_support group (or whatever you decide to call the team who supports scale) will have an inbox to receive messages. Those messages will only be visible to members of the support team plus the originator, which in this case would be the scale member.

The good news is that this is easy to set up with no additional categories.

Thanks for the idea, @Stephen. That may work for what we need. Is there a way to see this in practice, or how it works? And what would separate this from a support email inbox?

Sure, just create a group for the team who are supporting these users and test sending them a PM.

You can also create a link from the Scale area in a pinned topic which would automatically create a new PM to the support group. It’s a small thing but it will make raising support requests incredibly straightforward.

And what would separate this from a support email inbox?

That’s the beauty of this approach, if you’ve enabled your instance for inbound email it can also function as a support email inbox. You can give the same team an inbound email address within Discourse, which will allow your scale users to raise support topics via the community interface, or by sending an email. Your support personnel will see all of the requests in a single place. It’s a fairly common implementation for your kind of setup.