How Successful Are Wordpress Integrations?

I am curious how successful Wordpress integrations have been for site owners. Not from a tech stand point, but from a functional and community stand point.

I’ve kicked around the idea of Discourse for a year or so now. At one time, we had a fair bit of comments on the site. Comments were open on all content, but it created lots of conflict, and under certain articles, comments were out of place.

Years later, we turned them off altogether. There were bad apples. For 6mo now they have been on and no bad apples, but not a lot of interaction either. That’s always tough to get going again once you put the kibosh to it.

I would just like to hear how others have faired. I think it would be nice to offer our readers another venue to not only discuss our articles, but open up some other topics for them to discuss on their own.

Any feedback would be appreciated, thank you!

Blogs never get comments. It is one the most overrated options in that scene.

The point of connecting a wordpress to discourse is expanding content of blog and give something to read for discourse community, because there we can get comments.

So, the direction is not from wordpress to commenting technically made by discourse, but raise discussion in forum and show it in blog in right context. Big difference.

But if you don’t know (or you won’t do the job as content creator) how to get active community to discourse, you don’t get any comments either. Then the best solution is closing commenting totally, not installing Discourse.

The worst scenario is a blog with comments and the author of blog has abandonded commenting totally from his/hers side. That is a (common) situation where technical solution of commenting system just doesn’t matter at all.

Hey Jakke, thanks for chiming in.

It sounds like your thoughts are community first, blog second. In my case, the blog will always be number one. I see a forum as an extension of the blog, filling some holes and providing opportunity for me to share topics there that I wouldn’t just create a blog post for. Also, for our readers to get a sense of community from fellow readers.

By the way, I saw a post of yours awhile back about the 90-9-1 rule. I found some articles about it and the 1% is even less on blogs. I never knew that “officially,” but have come to know it’s true over the years. Thanks for sharing your knowledge.

Mine blogs get 100x more hits than community. But reality is that you don’t get any comments to blog. You can reach wider audience thru a forum and that way expand blogs. It is quite simple system

I am curious, have you ever compared your forum traffic, to the amount of posts within the forum?

I ask with the 90-9-1 rule in mind, I wonder how forum participation compares to the rule? If anyone has ran the numbers, I would be interested to hear your results.

Earlier today, I ran the numbers for the last few months on our blog. Comment rate is just 0.2% of actual website visitors. Mind you, people read the entire article per time on site, they just don’t comment often.

That said, our site is very niche, and our community is small…

It’s maybe off-topic since it doesn’t use WP-Discourse, but I integrated the list of the last topics on WP with a custom plugin: 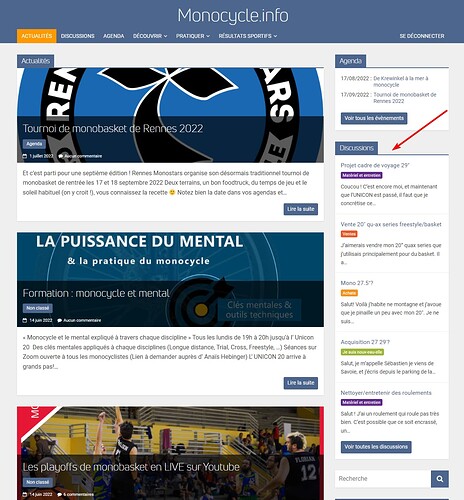 Is it useful? I don’t know.

Sorry for this not-so-interesting reply.

Ahh the reply is great. All of the information is very helpful.

People register on WP from Discourse, but it has no real use in our case. It’s just the same profiles on both websites… It had almost no effect on our community, but I guess our redactors find it convenient to use the same account on WP and on Discourse.

Since you swapped from just WP comments to a forum, was that well received? Did that bring in more engagement, at least, into the forum?

I embed comments but I don’t think it adds value.

I know when I turned off comments on our site for a while. There was no change in page views or time on site. I now know, that is also due to such a low percentage of users commenting to begin with.

Since you swapped from just WP comments to a forum, was that well received? Did that bring in more engagement, at least, into the forum?

Sorry, I wasn’t clear. The forum was along the website for a long time (20 years), so WP comments were maybe a thing a long time ago, but the forum has been widely used very soon, in the 2000s.

However, migrating from phpBB to Discourse was unarguably a (relatively to a lot of factors) success, but that’s another story.