If automatic backup fails, there should be a warning

I’ve had a site’s auto backups fail because there was not enough disk space, but I didn’t realize it. Running out of disk space is something that I would like to know about. Could the backup job notify the admin(s) if it fails?

Sure @tgxworld can you make sure this is the case?

These are invites to the backup messages that already exist in the system account yes? 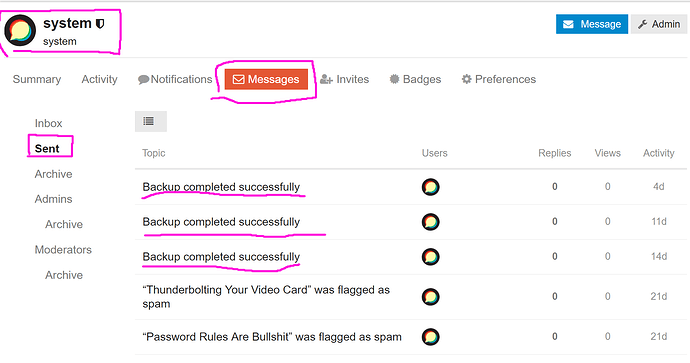 But have zero visibility… I wonder if we could link to this from the backups page at least?

A group invite would now trigger a notification so we have better visibility than before. What I also considered was to add an admin dashboard alert on top of inviting the admins group to the failed backup log PM.

I like the invite to existing backup topic approach, since one CLEARLY already exists

… but nobody could find it.

Hehe Im a little confused about the previous reply. Do you still think that it’ll be hard to find the topic? Inviting sends out an email as well so admins are notified via a notification and email.