I'm trying to migrate an old discourse by creating a new discourse, but I'm having trouble

I’m trying to migrate an old discourse by creating a new discourse, but I’m having trouble.

Previous discourse version was 2.8.0.beta4 (d3779d4cf7).
It is not possible to upgrade the version of this, so I am trying to migrate by creating a new discourse.

I knew that the upload could not be done due to this reason, and I tried to solve it, but I still can’t find a way.

When I tried to change the old discourse backup folder structure to the same form as the new one, the backup was imported. However, when I proceed with the backup, it fails.

The image below is the log when backup fails. 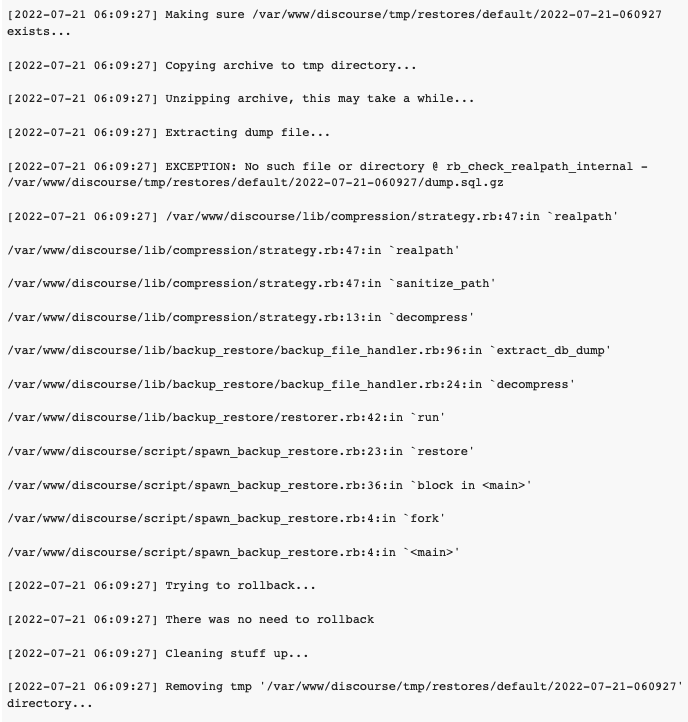 If anyone knows how to solve it, any help would be greatly appreciated.

Why not? What happens? You should be able to restore an older backup to a new Discourse. Sometimes a database issue or a plugin can interfere.

That’s not the case, so there must be something wrong.

Can you elaborate on the differences you’re seeing?

If i translate Korean into English, it’s ‘I’m sorry. An error occurred while uploading that file. Please try again.’

Looking at the folder structure, the previous version created a separate folder for each image file. However, the latest version contains all images in the 1X folder.

See Restore a backup from command line (which I believe will tell you how to restore from the command line). That will give you the full error message.

It’s hard to see in such a small image. Those numbered directories can originate from the fact that the forum was over 5 years or so old, since that was used back then.