I’m just thinking about a new feature to easily delete image from composer. Many times happens when user upload more image and only want to delete one of them it is really complicate if user not familiar with markdown. Of course they try but the result is usually some broken links etc…

There was a modification with image alt text which works pretty good and user friendly. It add the ability to edit alt text on preview side.

New features in 2.8.0.beta8: API key improvements New read-only scope: API Keys can now be created with a read-only scope, allowing the key to be used for any GET API requests. This is in addition to the existing global scope, allowing unrestricted access, and granular, allowing admins to specify which groups of routes the key grants access to. API key pagination: The API Key page now properly handles large numbers of API keys, with auto-load support as one scrolls. Easier editing of image …

It would be awesome to place a delete button on the image in preview side. Maybe a

icon or X on the image corner and clicking that button it could target and remove the actual image markdown code.

Thanks Don, that sounds like a useful button and it’s probably not too hard to add. Will mark this as #pr-welcome, happy to see this added.

I am working on resolving this; I almost have a working proof of concept.
I just have one confusion between those two components d-editor.js and composer-editor,js. My solution so far is based on listening to the preview/html content when updated inside d-editor.js compoenet…etc.
Am I in the right direction?

The most appropriate place for deleting an image would be next to the buttons we show on hover for resizing images and adding alt text in the composer preview.

The hook to delete the image markup should be very similar to the 100%/75%/50% buttons. You can see here how the image scaling is done.

The most appropriate place for deleting an image would be next to the buttons we show on hover for resizing images and adding alt text in the composer preview.

I am a bit mixed on adding this there, cause it seems so rare to need it and it will add visual noise.

I guess a “bin” icon aligned to the right of that line, so it is not too close to the edit button?

Also, I wonder if the order of operations here is right, is rotate and crop more important?

For just adding a delete button we could do: 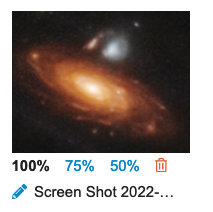 Move the edit button to the left (bonus: closer mouse distance to the composer input), and then put the delete button on the right… so now we’ve got some distance between harmless and dangerous actions.

Also, I wonder if the order of operations here is right, is rotate and crop more important?

This is a bigger scope, but with rotate and crop we might want a whole different kind of menu?

http://notion.so has a nice example:

So they have their button with a bunch of options, scaling is click and drag on handles…

One nice little detail is that if you add an image that’s too small for the button overlay, they force the image to a scale that contains the button once you try to interact with it. That avoids having a button on hover that overlays any surrounding content.

@awesomerobot Thanks for your feedback. I have another question to make sure we are on the same page. regarding this point:

when the title editor is open, can we position it to match the baseline of the preview text (so a z-layer above)? This makes things less shifty on click:

Noramlly those appear in same line; however when the alt text is long, the alt conainer would overflow to the next line:

Now back to your points above; it would make sense assuming you want the overflow behaviour to be the default. Otherwise for short alt the delete button would be just close edit alt button.

I followed the second apprach above:
Here is a video how it looks

If you all looks good; I would refactor code and push/create a PR.

Thanks for explaining the extra details! I think this looks good!

This has now been merged as of today