Improving the filter by user within a topic feature

Currently, you have the ability to Iso any user within any given topic by clicking on their username anywhere within the thread and pressing the “X posts in topic” filter button. While this is a great feature, and it making its way to mobile has been great, there are a few things that would make using this feature even better and less of a hassle.

First off, let’s look at a relatively common instance: one poster replies to another, but does not quote the post they are responding to. Although this may be considered bad etiquette on most other forum software, Discourse’s insistence on cutting down on quotes means that to do so here would be unnecessary (given you can simply pop back to the post they replied to). Thus, this is an extremely common occurrence on Discourse-based forums.

If you are in the process of Iso-ing a user on a given topic, however, this becomes a problem. Let’s say I want to see what post the following user is replying to here: 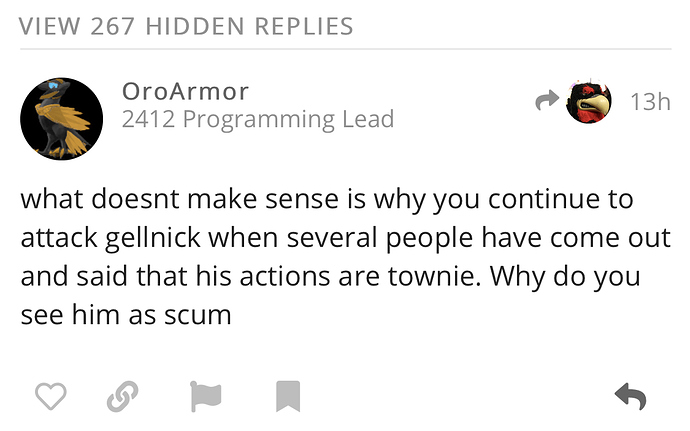 If I click on the icon of the player he’s responding to on PC, I see the following, which is great:

However, on mobile, it just turns the post we’re looking at blue momentarily: 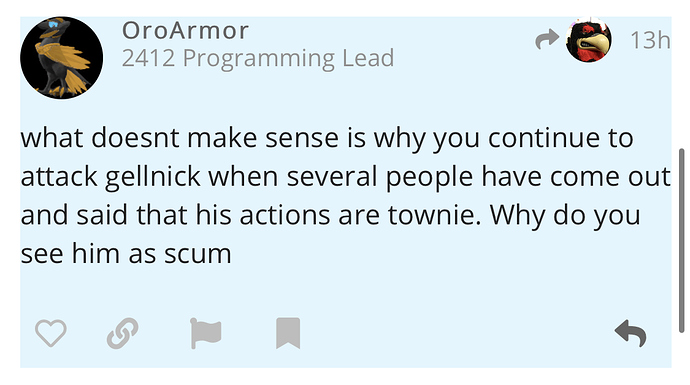 This makes trying to effectively Iso a player a nightmare on mobile, as I now need to show all of the posts between the one I’m interested in and the user’s last post. In this example, that’s in the hundreds, but I’ve seen cases of this where it’s over 1,000 posts. I’m sure it’s fairly obvious how this can be problematic to scroll through on a phone.

To this end, I think one important improvement the Iso feature needs, especially on mobile, is to automatically un-hide any post that you are directly linked to while Iso’ing a player. That way, clicking on the little icon as shown, or even going up to a post the Iso’d user quoted, will keep you in the same Iso mode, but just allow that singular post to get through the filter. This would also chain together, allowing you to track a conversation relative to any given user if you so desired, and would just make Iso-ing someone way more user-friendly on mobile.

Secondarily, it would be incredibly useful to allow us to multi-Iso by filtering to posts made by not just one user, but by as many as we choose. This would likely need to be an option at the bottom, near the topic controls, but could go a long way towards helping us filter discussion down to a handful of users of interest, and I can see a lot of applications for this in places such as managing large discussions, moderation, games, and more.

I truly believe that if these two features were added, the Iso feature would be a lot easier to use, especially on mobile, and would have a lot more usage overall.

(I didn’t understand the term ‘Iso’: I see now that it’s a ‘filter by user’ within the thread, to display only one user’s posts in the thread.)

“Iso” is a common term for this on forums, as you are viewing a user’s posts “in isolation”.

Bumping because I still really want to be able to iso multiple people at the same time. No idea how hard that would be to add, but it would certainly make everyday browsing way nicer.

Another bump because useful feature

Can we do this with a querystring as an advanced ninja feature @sam? Or is it too hard?

The whole problem is that tapping a UI element doesn’t cause the post to show, I think we can accomplish this through selective unhiding in the post stream and don’t need to touch the query string at all.

Whatever solution is implemented should also activate on go-to-quote.

Whatever solution is implemented should also activate on go-to-quote.

I definitely agree - would make using this feature on mobile way better!