Why has my report been running with the same results for months now? I’m running a report based on activity since the community’s inception. The community has been increasingly active this whole time.

For example, one user shows in the query results as having 271 topics viewed, while their profile summary says 1.2k topics viewed.

Having a quick run of the query here on Meta the statistics do update when I change the ‘duration’ value, so it doesn’t appear to be getting stuck anywhere. I’ve also run it for a 90 day duration and checked it against a new-ish user whose main activity has been within that time, and their stats marry up with their summary.

Is there something else I could check to see if I can replicate?

Maybe you could clarify something for me.

I am trying to run a query starting 439 days ago (looking at the signup date of one specific user as a test) and choosing the duration date as the same number of days. I was under the impression this would include all their participation data since their signup. However, the data does not reflect that.

How would I achieve that?

It also looks like a User Participation Statistics query from 439 days ago until now only includes members who were already registered and active at that time. It does not include participation data of members who registered after and were active within that time frame.

Can someone help me customize the report to create one that captures the data I need? SQL is something I know only at a surface level.

Looking at the report, it seems to be in visits order with the highest at the top - so anyone who joined up midway through the time window you select will be somewhere down the list (and the visible list is limited to 1000, though I think you can get 10,000 if you export the results as a CSV).

We can come up with a custom query though.

What data are you looking for exactly?

We don’t even have that many members…yet, so all good there.

We can come up with a custom query though.

What data are you looking for exactly?

One thing that would be helpful to clarify, is how each column is calculated. There are discrepancies between the CSV and what’s on a member’s Profile Summary page (note: we’re only comparing those two different sets of data where the query dates match the lifecycle of the member’s enrollment).

We thought, given the :from_days_ago and :duration_days time frame of the query, that was what data it had been producing.

One thing that would be helpful to clarify, is how each column is calculated. There are discrepancies between the CSV and what’s on a member’s Profile Summary page (note: we’re only comparing those two different sets of data where the query dates match the lifecycle of the member’s enrollment).

I’ve been having a explore of it this morning to see if I can find out more. Mine times out on me when I try and go back 498 days (to my start date

), but I have managed to get one for a year so I can roughly compare it to the User Stats.

(give or take a few hours worth of data)

There is a difference for posts_created, topics_created, likes_given and likes_received between the two - and taking a closer look at the SQL it seems the User Participation Statistics query doesn’t exclude deleted posts, whispers, or PMs, which may account for it.

The topics_viewed and posts_viewed seems pretty accurate for both though.

I’m not sure why some of your users aren’t showing up? The only exclusionary criteria I think I see is that they must have read more than 0 posts in the time window - which should include pretty much everybody, apart from staged users.

I’ll keep digging and see if I can come up with more.

My discrepancies are the reverse: the query numbers are smaller, not larger.

When I enter 441 in :from_days_ago and 441 in :duration_days I get these (below). Compared to this report for the same timeframe (at least…for the highlighted user). 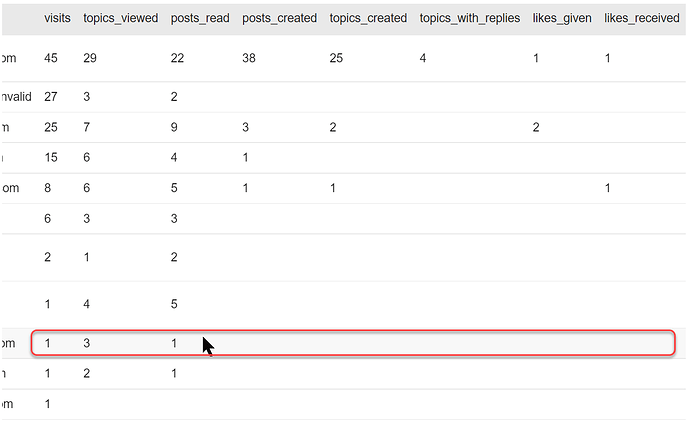 I realized that a few minutes before your response, hahaha. Thank you for your patience.

I changed :from_days_ago to 0 and everything in life makes sense!!

I learnt quite a bit from studying that report so it was still pretty useful.