The following text appears not be be parsed properly by Markdown. Here’s an image of what is entered: 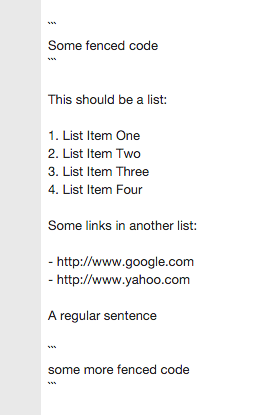 Below here shows how it renders

Will be far better in our new markdown engine.

By the way – in case it is relevant for development of the new markdown engine – the bad behavior is different when there’s a space after the opening ``` versus the closing ``` of a block.

Per our migration plans, I just enabled markdown.it at Meta. It is an excellent CommonMark compliant engine. I expect quite a few edges to be found during this period of testing. Do not open bugs about the new Engine, just reply here. I/we will be updating the top post here with the list of issues and striking out stuff as it is fixed. Current known issues (to be fixed)

Onebox vanishes after you start typing and works not-super consistently