Users on our Discourse forum are able to bypass our “max emojis in title” limit by having the emoji up against the word just prior to it.

We’ve confirmed on our end that the emoji in title limit is currently at 0, while this user in the example above used 3.

Please let me know if more information is needed. Thanks!

If this is an easy fix I support it @sam … if not then no.

If this is looked into, it’s worth mentioning that when emojis are not followed by a space, they actually don’t render at all in titles.

With space between emoji and text:

Without space between emoji and text:

To be clear, this happens with emojis in any position and not just not in the first position of the title.

There’s an exception to this which is when there are consecutive emojis (no spacing):

Similar problem here. We have set allowed emojis in titles to 0.

Somehow one user always gets around it, and I can not replicate how:

@codinghorror - do you know how that is possible despite the max emoji setting set to 0 for titles?

Out of sheer curiosity, I’ve just had a quick go at replicating it on try.discourse.org (that has a 1 emoji in title limit) and I can squeeze in two using the emojis from my phone gallery by not leaving a space as above. 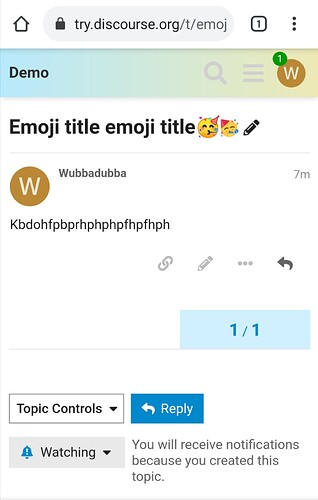 It seems to treat the first one differently to the second for some reason.

I’m afraid I have no technical solution though. Alternatively, could you open up the OP, snip the emojis out of the title, and leave an edit note asking the user to stop circumventing your forum rules? (or a pm to the same effect?)

Well, sure our mods could do that, but should not a setting of 0 emojis do what it is supposed to do?

Also, you can’t see it from the images, but there is a space between the last word and the one emoji in the titles this users posts.

I can’t replicate myself how he is doing it to circumvent the filter though.

I haven’t tried making a post to confirm this but at a glance, I think it’s combining one Unicode emoji character with one emoji name: Emoji title emoji title🥳:partying_face:

I missed your earlier messages initially re. the star and cloud in titles. I can’t reproduce it with a space but I can reproduce the problem described by the OP, i.e. any number of emoji are allowed as long as they immediately follow an alphanumeric (possibly others, not whitespace or emoji) character.

I couldn’t find one but perhaps the user you refer to is using some character that looks like a space but isn’t considered whitespace, allowing an emoji to follow it.

Well, sure our mods could do that, but should not a setting of 0 emojis do what it is supposed to do?

Though I view these restrictions more as a bit of friction to encourage users to adhere to the forum preferences, rather than an absolute lock. There’s always going to be someone who finds a way to sidestep something or other, and it can be a bit of a whack-a-mole to tighten up everything (especially if you can’t figure out how they did it).

Sometimes a bit of manual moderation can achieve similar results, or at least provide a bit of time to figure out a better technical solution. If there’s only one person circumventing the restriction, and you edit the titles and ask them to refrain in the future, then manual moderation may be easier than tracking down and fixing the side-step.

But I hope you do figure it out. I’m quite curious to know how they’re doing it now too.

Maybe. He just posted three new topics with an emoji at the end. This time there is no space or any other character between the emoji and the last character in the last word anymore.