We have received reports from a few of our players where their mobile devices are receiving the desktop version instead of the intended mobile version that other players enjoy. This causes them numerous issues, including posts being largely vertical. 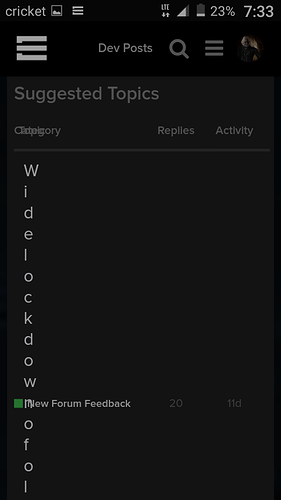 With the assistance of one of our players I’ve managed to reproduce the issue by emulating one of the affected phones using Google Developer Tools.

Edit: Another player came back to me with more information about their device, reproduced the same issue using the screen resolution provided by them.

That’s unexpected, from a quick search.

The NOKIA Lumia 920 should return the following User-Agent:

Which should activate https://github.com/discourse/discourse/blob/master/lib/mobile_detection.rb#L3
The user agent you gave is different, I suspect some “force desktop” setting is used by the user of this phone. (WPDesktop)

Couldn’t find the user agent of the Alcatel.

And right you are, that seemed to be the issue. The first guy was unaware this setting was enabled in his device.

The other guy seems to choose the desktop version (he claims to prefer that) and the issues that come with that on his device. Not much one can do to help with that.

Thanks for the assistance.