Get latest code is the easiest way… it has default styling now.

@codinghorror does this also include images in the topic? Do they automatically get added to the banner?

@ampburner yes you can use images, they will appear.

One thing I missed @zogstrip, right now the banner only shows up at the top of the page. We also need to overlay the banner in the case that users deep link to a post inside a topic, like so: 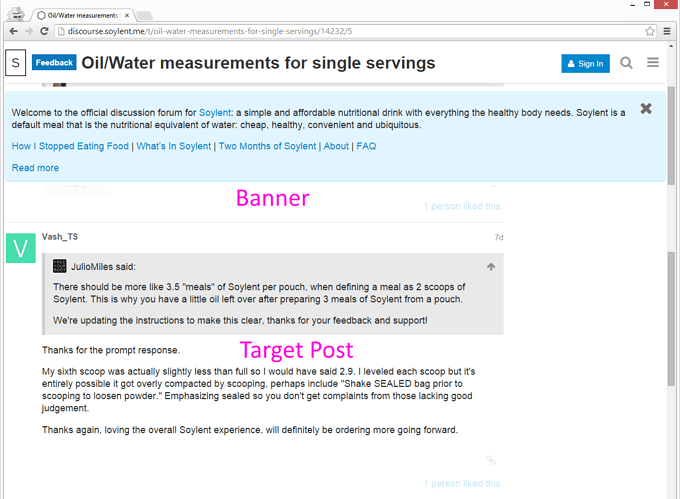 Because when you arrive through a deep link URL, that’s when you need a “what the hell is this place” introduction the most!

This is now implemented

This looks pretty good, but was the intention to have a margin above like this? 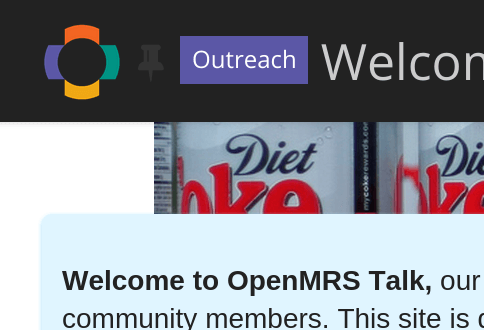 Nope. That’s due to your custom header.

Is this planned? I would very much use category based banners.

@meglio you can use categories background images as banner:

But then users wouldn’t be able to close such a banner, would they?

@meglio nope they are kinda Billboards. you can’t dismiss them.

Then it doesn’t solve my issue )

Thanks for reporting that, I just pushed a fix

Cool, thank you… I hope you don’t mind, but I have one more tiny bit of feedback.

On a topic page, if you’re at the top of the page, the banner shows happily enough on a clear background, like so:

But as soon as you scroll even 1 pixel down the page, everything suddenly jumps up and the top of the post gets hidden behind the banner:

I know that this is a nit-pick, and that most people are never going to notice this (as I think most would just dismiss the banner once they’ve read it), but I noticed it, and I think others would too. So if instead of a sudden jump, as the banner goes from position: relative to fixed, I was thinking it might be good to keep an artificial margin at the top of the page, the same height as the banner, and have that be dismissed when the banner is dismissed?

I agree but this is complicated. If you can find a way that supports both topic and topic list pages, as well as custom header, I’ll be more than happy to merge it

I don’t know if I should start a new thread for this or something, but I’ve had this report from a user:

FYI I’ve dismissed the welcome message on http://talk.birmingham.io several times now (on different machines) but was logged in

How is the dismissal handed? Is it based on a cookie, or is a record added to the user?

I have noticed weirdness with dismissal as anon before. Maybe @zogstrip can elaborate?

I may be wrong, but I believe if you edit the content of the post that is made a banner topic, it brings up the banner again for everyone and they have to dismiss it again. I’ve run into this a few times in our “staging” environment while our admins were trying to get the wording to be “what they wanted”

That is how it works right now. The key of the banner topic is based on the actual content of the post.

Yeah, that makes sense. It would be even better if redisplaying it after an edit was optional.