I am looking for help integrating an Amazon Lex chatbot into Discourse composer dialogue box.

Amazon Lex can be deployed through an iframe. I can provide the code.

I have a few different chat bots. I would like to give users the option of dropping the one they would like into their post through some type of navigation option in composer. See mock up below.

I already have a Discourse site up-and-running. 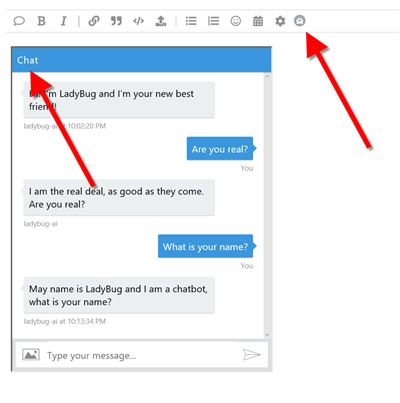 Why wouldn’t you build this with Amazon Lex as a full user that would post in a topic like any other?

Then you would not change the Composer, but come up with a way to drop a chat bot into a Topic.

That way, the Composer remains the same, but the chatbot is provided with the ability to respond to the users posts.

Conversations then occur in the native way without fighting the current interface so much and making the integration much ‘cleaner’.

This would certainly be a very interesting project. Refining the requirement could also optimise the final experience, make things easier to build, manage, maintain and more cost effective.

Very happy to discuss this offline.

I’d love to discuss offline. (I hope this doesn’t break Marketplace rules. We are spit-balling the project.)

Yes, I was first looking at hosting Lex separately from Discourse. I could then drop the Lex chat into a Discourse post but the number of API calls looked daunting. The APIs had to login, create a post and then send the contents of a Lex Chat to a Discourse post all outside of Discourse.

It seemed better to just integrate the user in a Discourse instance off the bat who then uses Lex within Composer, but I assume you have a different take on this.

There’s already a Hubot adapter, and it’s demoed here. This is the type of interaction I had in mind:

Setting up a smart chatbot on discourse

Hello, After weeks of tinkering, I finally managed to set up an AI bot, similar to discobot but one that learns and is more responsive. Here is how I did it for anyone interested in setting it up. There is quite a few steps, but once you get it all set up, the result is amazing. Install the hubot plugin for discourse Hubot Adapter for Discourse, to install hubot on your discourse, the hubot variables like HUBOT_DISCOURSE_USERNAME are entered into (yourhubotfolder)/bin/hubot file, just nano…

I built a Hubot adapter for Discourse. https://github.com/featheredtoast/hubot-discourse-adapter This should work moderately well for communities that desire bot integrations. There are a few gotchas (see the readme) but for the most part it has been pretty incredible to tinker with so far. Something my community desired was a dice roller, which I knew existed as a hubot plugin. While there have been other attempts at integrating dice rollers into discourse, if I was going to run a bot agains…

If this approach was acceptable it might form the basis of support for a Amazon Lex version, building on that work.

Then again, Hubot might cut it for your use case, in which case, just use that?

Thanks for the tip. I am working through the tutorials now. That looks like a better solution. I am not married to Lex and may opt for DialogFlow, per the example.