Continuing the discussion from What is the most awesome plugin for Discourse, that does not yet exist?:

As a user what is the most amazing plugin for Discourse you could imagineer?

Many development-centered forums have a special thread structure that goes something like this:

In my experience, one out of two things happen:

I’m very open to other solutions to this problem. I propose a plugin based on replies:

Whenever the topic author writes “update!" or “!update” (like GitHub’s issue-closing by comments) in the first paragraph of a reply to their own post, this will be read as a special reply to the topic post: A post update. It could appear as something like this (nevermind the inconsistent text content of the update posts - I got tired): 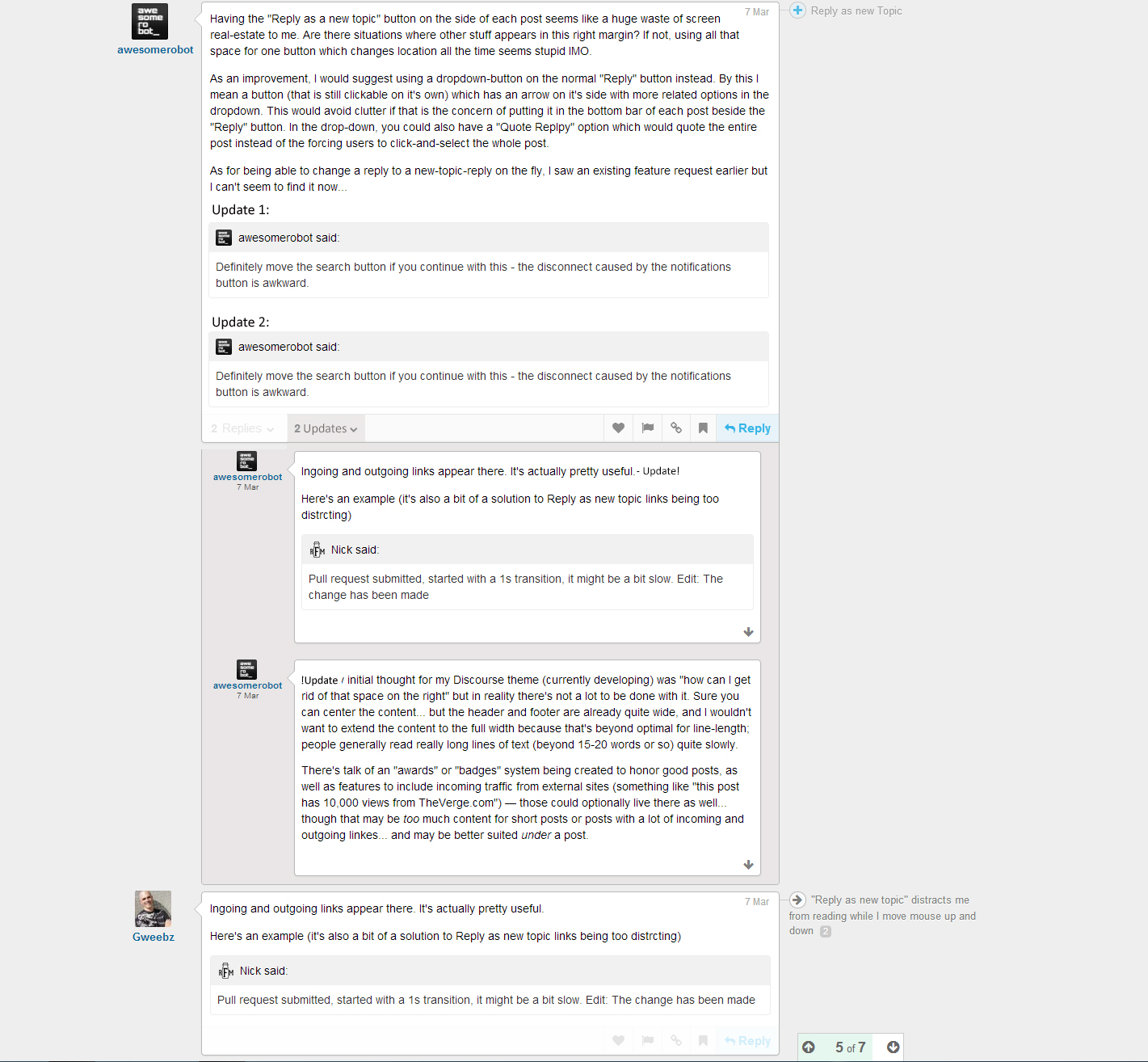 Now in my opinion the “replies” button of the topic thread is pretty redundant anyways, and could let feature like this take precedence if they are in use within the thread.

How is this materially different than the edit pencil which already shows the count of edit updates to the post, which you can also click on to see the edit history for the post?

First and foremost, no one’s gonna be clicking that edit button expecting to see significant updates. Edits are for minor thread revisions, not for new content updates. I actually think the edit button should have an “updates” counterpart, with a clickable update count that’ll show you all new update reply-style. That might even remove the need for a “Updates” button in the gutter that conflicts with Replies.

Perhaps the edit pencil automatically could be highlighted more strongly if the post changes radically, versus small edits.

But then you’d still have to bump your post to notify people about the update. Also we’re getting dangerously close to encouraging a workflow that’ll result in Problem #1 explained above.

Much like blog posts, I don’t think topic posts should encourage major edits. Then you’re using your forum as a collection of static pages with comments instead of a constant flow of branching discussions.

Come to think of it, this feature should support “Reply as new Topic” as well.

I often have this problem on my forum where a thread starts with an idea, and then eventually goes into production. Now as soon as it goes into production, i.e. functional code starts being made, this should be happening in a new thread. We’ve entered a significantly different stage, and the new topic driver (the coder) might be different from the original one (the idea guy).

But right now there’s not enough incentive to start a new thread. discourse comes close to making it a one-click process, but there’s still the matter of going back to the thread of origin and having to edit it to clearly point out that one of these threads that’s linking back here is in fact a direct continuation of this thread, not just another related discussion.

going back to the thread of origin and having to edit it to clearly point out that one of these threads that’s linking back here is in fact a direct continuation of this thread, not just another related discussion.

You could do that by “replying as new topic”, then flagging the existing topic for a staff member to close it.

That means the last action in the topic would be a link to the new related “continued here…” topic. However, you might also want a prominent link to the continuation topic from the first post as well, no? And that implies unavoidable editing.

Some of the topic disposition (close, archive, etc) might need to be mirrored at the top as well, somehow.

However, you might also want a prominent link to the continuation topic from the first post as well, no? And that implies unavoidable editing.

Ah, I think I failed to explain a critical function of this plugin. The “Update 1” and “Update 2” in the mockup would not be added as manual edits. They are automatic edits as a result of using the !update action in the posts below.

So imagine somewhere down that thread, aweomerobot wrote that first update of his about “ingoing and outgoing”, and because he included the word “update!” in the first paragraph, his post was automatically embedded as a numbered “Update” in the topic post. That’s the key convenience boost here.

Taking that one step further with “reply as topic”, that would result in another embedded update, along with an automatic flagging of the original thread.

Perhaps the edit pencil automatically could be highlighted more strongly if the post changes radically, versus small edits.

By the way, I do think the above is a great feature for core, and it would be very welcome. I didn’t properly stress that in my previous reply.