This plugin adds the Konami Code to Discourse. 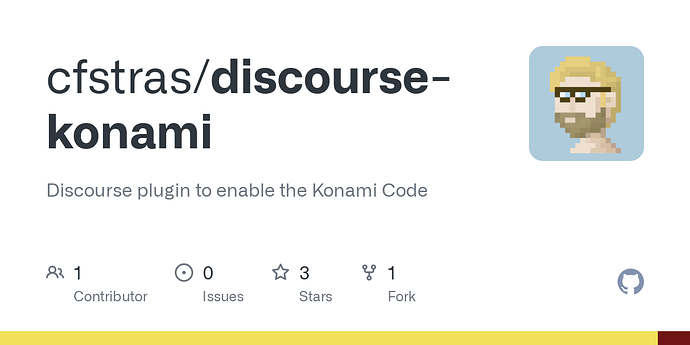 Discourse plugin to enable the Konami Code. Contribute to cfstras/discourse-konami development by creating an account on GitHub.

It’s built on Konami-JS, which made this really easy :)

To install, just open your Docker container’s app.yml and be sure to have the following:

Now, ./launcher rebuild and off we go!

Suggestions and patches are highly welcome.

Nice as a small sample of what is necessary to build and install an extension.

I agree with @jbruni this is a great idea for a sample plugin or extension. Fun and actually somewhat useful!

I based it off of Tutorial: Your first Discourse plugin, so thanks to @danneu for that!

Every site should have the Konami Code

Someone needs to update this to work with Discourse 1.3!

Done! was a quick fix.

Just ensure to put
- git clone https://github.com/cfstras/discourse-konami.git
in the plugins section of your app.yml.

Great! I activated it

Now, is there a way to award a badge when a user does the konami code ?

Doesn’t look like it straight off. It would probably need to be modified in order to trigger a badge grant api call or an entry into the database and a badge query from that.

Ok so what exactly does it do? Any demo / video / example?

See the OP, I just updated it

This plugin adds the Konami Code to Discourse.