I have seen a norm in Discourse forums that topics get into a meta or tangential discussion far too easily and then the original topic somewhat dies. This happens more often on some forums than others, but I suspect the majority of Discourse users do not know that reply-as-linked-topic exists.

If the option were exposed when replying (instead of requiring a click on the reply-arrow icon), it would get used far more often. It would prompt people to consider it (which I’m suggesting would be great).

Perhaps radio buttons, maybe two or three of the options are exposed with a “more” link to show others.

At the least, it could be made an option to have it unexposed.

I suspect this would have a huge improvement in the nuanced choices people make about how to engage most effectively.

I suspect that most of the time when replying the average person doesn’t need to see the “reply as linked topic” option at all… and some people might not need to ever see it; showing it 100% of the time seems like overkill.

I wonder if there’s a better way to educate people about the possibility of switching reply types? 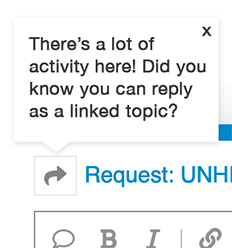 So we could show this under specific circumstances… brand new users already have a lot to learn, but maybe if you’re a newish user that has posted 20+ replies, and you’re replying to a 100+ reply topic or something in that general area?

(We do already have the composer-specific popup for things like the “similar topic” warning, which is also an option… but I like these little popups that point to the functionality specifically).

In addition to something like that, it might be that just making it more really obvious that the arrow is a thing to click would make a big difference.

To be clear: I repeatedly have the tension where I want to tell people to please use the feature, and I feel inadequate even saying “click the arrow”. I can’t readily in words feel they get what I’m talking about. The only thing I feel works has been to post a gif animation of clicking it. So, right now, even telling people explicitly isn’t enough.

The mockup is a good idea, but I think you could force people’s hand to click the arrow (via some complex, imaginary set of remote robotics), and it still wouldn’t change their behavior.

I’m … not optimistic … about the idea that you can get people to go out of their way to create new topics, even if they know exactly how to do it, when it’s so much easier to reply to the existing topic.

(I also think it’d be a mistake to make it very easy to spawn a bunch of new topics willy-nilly. That’s trading one set of problems for another.)

All you’re left with is arbitrarily making it harder for people to reply, to incur intentional friction on reply, which has its own set of pitfalls. I mean technically we want people to read the entire topic before replying, yes, so we could block replying until we know you’ve read “enough” of the topic? Or we could block replying (somehow…) until you’ve read “enough” of the source article that the discussion is about?

There is no clear win here. The A+ students who sit in the front row of class will create new topics and help split. Everyone else … kinda doesn’t care.

Also worth mentioning that it was visible on every post at once point in Discourse history (in the space where the timeline is now). A lot was different then, but I don’t recall it being used dramatically more before the change.

Expanding on Jeff’s point, it might be more impactful for a community to recruit their most active/diligent/reasonable people that care, promote their trust level, and have them help out with organization.

If you made every reply prompt people with a forced choice of new-topic vs same-topic reply, you’d indeed reduce engagement but there’s no doubt the function would get used more.

Hide the function, almost nobody uses it.

So, there’s trade-offs. This isn’t all-or-nothing. The aim is to reach all the users who would bother and currently don’t know and can’t even readily understand when someone tells them the feature exists. What portion is that? Definitely non-zero. Probably varies amongst different communities. It might be very high in a niche community of smaller numbers of highly-engaged users and much lower in a drive-by-commenting style place with less engagement and larger audience.

The status quo reduces use even for a communities of all A+ students.

Some communities will have reasons to really prefer on-topic focus and no problem with lots of small topics. Others may never care. Don’t make it hard for communities that want the feature. It’s a great feature.

At just a tiny push, if there were a built-in way to post something like the mockup above, it would at least make it easier for moderators to choose to easily show users the feature.

I don’t like the suggestion that handling this should all be about hands-on moderation rather than teaching and empowering users. Keep in mind that there are instances of pretty hands-off (and even relatively ignorant) moderators where engaged users still want to help each other have the best experience.