Here is a scenario that comes up here and there in many communities: you have a topic in which people list different exemplars of a specific type, for example: “books about X”. The main purpose of the topic is to create a list that people can browse and be inspired or whatever. If someone wants to start a discussion about one of these books, that should be a new topic (but, of course, with a link back to the list topic).

In this scenario, it could be very convenient if the reply-to-post button (not the reply to topic button) would default to “Reply as new topic”. I say “could” because it remains to be proven that this actually works rather than creates confusion. But I think it would be worth a try.

My sense is that it would be sufficient to limit this setting to mods and admins via the wrench button in order to avoid any changes in the UI for ordinary users.

No, the earlier UI proposal is better. For advanced users the reply glyph at upper right could become a button that lets you select the “type” of reply:

With the new right gutter, where should "Reply as Linked Topic" go? ux

Whilst not 100% on this idea, it might be reasonable include a menu option. [image] [image] Perhaps the options here aren’t quite correct - but hopefully this shows the idea. You could also perhaps slip “Official Warning” and “Whisper” in there as options too. This would also open up a place to indicate a “call” type as required by Start a new conversation with a customer not yet in Discourse feature request. The idea is to change the type of reply whilst editing. In the same way as now c… 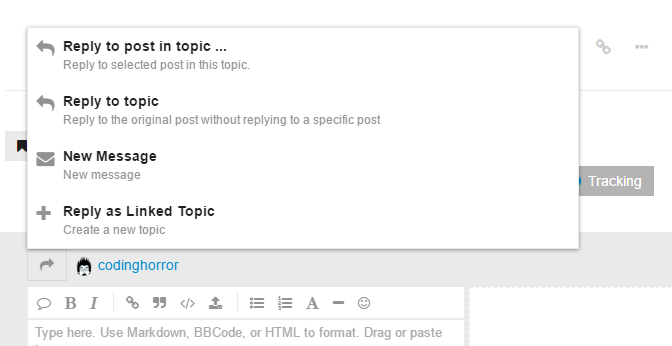 Wow, this is awesome. I can’t say how often I’ve been wishing for those options! So where abouts is this on the roadmap?

Nowhere at the moment, since it’d only be useful to extreme power users. But I do like it. Just hard to justify work that only benefits .01% of the users.

Plus: I believe in education!

But on a more sober note: my OP was actually intended for the precise opposite end of the spectrum, i.e. those users who don’t understand the instructions: “If you want to discuss one of the posts in this topic, please start a new topic.” So this is really a different feature.

It also opens a “don’t make me think” can of worms.

It’s not entirely a “free” feature, unless you assume most people will ignore it, not realize it’s a button, or never click / tap on it:

It is fairly subtle which is nice!

I’m not sure what you mean. Are you saying that once people would start discovering that hidden reply-menu, they will go like “Whoo, wait a moment, I just wanted to reply to this and now I have to choose among 5 types of replies?”

not realize it’s a button, or never click / tap on it:

Long press on any reply button could also work intuitively, at least on mobile.

This would also be useful for selecting a whisper type reply @sam per the earlier mock-up in the topic.

Continuing the discussion from With the new right gutter, where should "Reply as Linked Topic" go?: This would also be useful for selecting a whisper type reply per the earlier mock-up in the original topic.