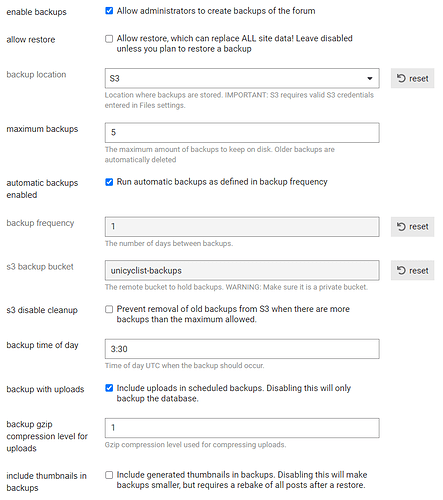 Here are the backups on the S3 storage (pay attention to the backup dates):

Here’s what I have in my local backup folder (pay also attention to the dates):

But from what I see in Configure automatic backups for Discourse,

From now on all backups will be uploaded to S3 and not be stored locally anymore. Local storage will only be used for temporary files during backups and restores.

And indeed, it was the case until… It was not.

Does anyone have an idea what’s going on? I’d like to get rid of these local backups created every 4 days. What am I missing?

It stopped doing that and I don’t know why. I’ll mark it as solved even if I couldn’t figure what was going on.

I had a problem like with with a site using Wasabi. It seemed to fail periodically and keep a local backup. I was unable to find erorrs at wasabi or in Discourse. I solved it by leaving wasabi, which was too bad because it was going to be cheap and easy.