Service not available | Update Error due to broken plugin

I’m still wanted to do some updates and got the message I should execute the following commands:

I have done so, but I got a Error message and the forum is not available, now. 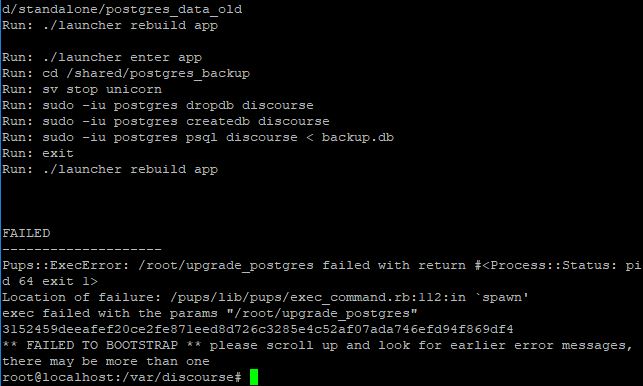 How to restart the service/ fix the problem?

This is the first time you’ve run an update in a long time?

It’s hard to tell with just a picture of part of the output.

I can’t quite tell what is happening. Did you type Run: before those commands? Or was that the output of ./launcher rebuild app.

If your forum being down is an emergency that you’d like to throw money at my contact info is in my profile.

Yes I’ve never done a update before - The Systemw as set up in April 2018.

I’ve tried to execute the commands: ./launcher rebuild app . and ./launcher start app but without any success.

Do you have any other idea how to fix the problem?

I’ve still executed the commands which are described in the manual: How do I manually update Discourse and Docker image to latest? and would like to start the session.

It seams the service is still running but nothing will be displayed if I would like to reach the forum.

I think I’ve found the reason why my forum crashed during the update.

If I add two hastags (##) before every git command in app.yaml file the forum is available.
One of the plugins is fault - how to uninstall it manually?

By hashing out the line before a rebuild you have effectively uninstalled it.

It’s a process of elimination as to which plugin is responsible though. Check #plugin to see if any are flagged as broken.