So I noticed there is the link to share a post/reply as a linked topic, and in messages its possible to share a message as a message and maybe change the recipients. I was wondering if it would be useful to do other combinations like:

You can currently convert topics to PMs and vice versa. Is that what you mean?

Maybe, I can’t seem to find this though, I don’t have the option in any of the ‘Share’ buttons, is it somewhere else, or maybe requires higher trust level?

It’s in the Composer, the top left icon is a button which serves a short menu: 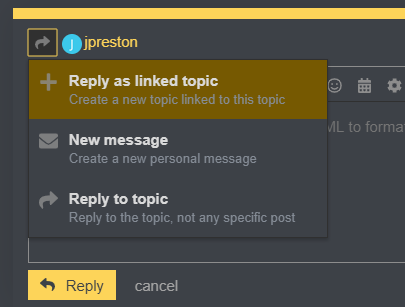 It’s not immediately obvious, though, I agree - intuitively you might think it would be a button on the bottom of a post, specifically the sharing button.

Ah thanks for that I understand now! I’m in the dark theme at the moment, and I didn’t notice the icon was a button. Also, I generated the feedback when I was in the share button just looking around. Probably a user who wanted to reply in a message would hit reply instead of share.

What if you wanted to forward the post to someone as a message? Would people do that rather than invite someone to the topic?

Maybe keeping the distinction between off-site and on-site interactions is useful?

It’s in the Composer, the top left icon is a button which serves a short menu:

whoa! I have been using discourse for years and never noticed this feature. thanks!

What if you wanted to forward the post to someone as a message?

Choose New message and enter the username of the third party

whoa! I have been using discourse for years and never noticed this feature. thanks!

Which kind of proves my point about how intuitive this is

So is the command line, doesn’t mean it’s right for everyone, and should be elevated and presented as the primary interface.

Yes, new users struggle with the obvious stuff, I get how you wouldn’t want to present this too obviously on the basic controls, it would confuse.