Unable to get Redis out of read only mode post upgrade

Hey Discourse community! This may be a quick fix, but I couldn’t find anything that solved this problem.

I recently updated my Discourse server (docker > AWS setup > EC2, postgres, Redis, SES) and have been stuck in read only mode. I’ve tried ssh’ing into my server and running the following commands

OR entering the rails console

but even after a rebuild I’m still unable to log into the Discourse server. Not super familiar with Redis, any help would be awesome!

You should only be seeing the redis readonly error if redis is replying with a readonly result. Is there any chance your redis is running read only?

Hi @eviltrout thanks for the response! When I initially setup the Redis cluster (2 nodes) it was working fine BUT with the in app update it put my Redis server in read only.

Any guidance on how to get it out of read only mode? Thanks!

Redis cluster, I am a bit confused, only setup that would work is a master slave, to support active-active clustering we would need application changes.

The error you have definitely indicates its talking to a slave redis:

The following would kick a live instance off slave mode.

Perhaps you are talking to a slave redis instead of master?

Hey @sam thanks for the response!

Here’s my setup below: 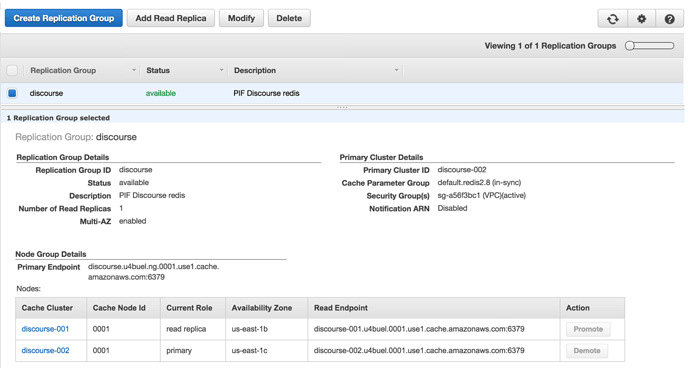 So quick update, I was able to get out of read only mode by doing the following:

This isn’t ideal, but workable. May be something to look into down the road for future builds, thanks!

There is no reason the upgrade would cause that, what is your failover check and process?

hm interesting, noob question, where do I check those settings? Thanks!

I am really unsure about how AWS goes about this, can you ask support at AWS for some help?

Yeah totally, I’ll dig into this more this week and will keep you guys posted. Glad it’s back up and running and a work around for the time being, more to come!

So not sure if there was a fix that came out from you guys (happy to say there was) or something weird happened last time, but the docker and discourse upgrade I just did worked find and didn’t kick me into read only mode

Hope all is well and that you are still enjoying Discourse.

In the past few years we have done a lot to make this readonly redis mode much more fault tolerant, we have not really heard complaints recently about redis being stuck in secret read only mode.

This topic was automatically closed after 3 days. New replies are no longer allowed.