Discourse says browser is unsupported and locks out almost all features

the thing that isn't supported here (after a lot of annoying fiddling with devtools to find out where it even checks this stuff) is the "aspect-ratio" css property, which as far as i can tell is only used for a tiny tweak during page loading. ...

Is this your post from another community? We need more than a screenshot to go on.

Discourse says browser is unsupported and locks out almost all features

The user needs to register and give us more information if they want to be helped. They haven’t even specified the browser - if it’s not a supported browser then this very likely isn’t a

Their replies seem to suggest meta is a “random website” and they aren’t interested in providing more information.

I tried to get in to Snap. But iPad wasn’t allowed 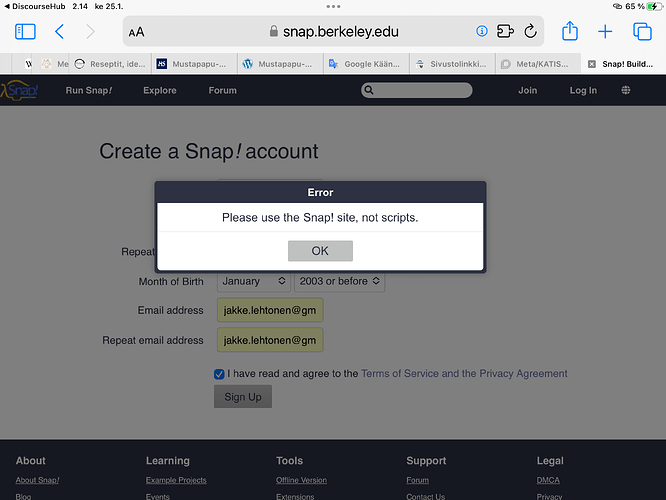 The user needs to register and give us more information if they want to be helped.

Plus it would be nice if it’s said to them that on meta, the official forum of Discourse, we’re actually happy to help people regarding our software as long as they provide enough information

I think that uses the aspect ratio to decide if a browser is compatible or not.

I think that uses the aspect ratio to decide if a browser is compatible or not.

Yes exactly - we’re using the lack of aspect-ratio as a way to detect older browsers. There are other, more critical, things we now using (e.g. the optional chaining operator) which tend to be unsupported on browsers which do not support aspect-ratio.

Our list of supported browsers can be found here. We currently supports iOS 15.7 and above (which is supported on Apple hardware released from 2015 onwards).

We currently supports iOS 15.7 and above

Edit: wait, is that not when you meant?

“Discourse supports this browser version or above” doesn’t necessarily mean that an older version of this browser won’t work. It’s just not guaranteed and it may stop working at some point.

Hi,
just from 4 days now my favourite forum tell me that my bowser must be updated: It’s wrong: I tried with google chrome, firefox, duckduckgo in iphone; the problem is the ios!!!
Are you sponsorised by Apple to oblige people to buy new iphone?!
All brower update to give opportunities to undersand last version of informatic language in internet php8, javascript, etc… so I think that you must update your code independament of major seller and operating system Like Ios
best regards

my favourite forum tell me that my bowser must be updated: It’s wrong: I tried with google chrome, firefox, duckduckgo in iphone; the problem is the ios!!!

Do you mean, that actual browsers aren’t supported by your actual iOS version? Cause then it’s still true that you have to update your browser.

I find myself: all my browsers are up to date chrome, duckduckgo, firefox and the problem is not fixed.
the problem is the ios of my iphone!

Yes it is because on iPhone you have de facto only one browser: Safari. And Safari follows the version of iOS.

Shoud Discourse be this pro-active with support question is different meta-conversation.

@Jagster
You’re right, that’s another discussion.
If programmers can’t program for browsers other than Safari, which becomes obsolete according to the constructor’s wishes…, then let’s change iPhones before it’s too late and speed up the process.

It is 90 seconds to midnight.

A time of unprecedented danger:
It is 90 seconds to midnight
2023 Doomsday Clock Statement

This is why I stopped replacing batteries. Battery wearing out was just an indicator to get a new phone.

Terrible for the environment and the wallet, I agree.

I switched to Android last year as a Pixel is more than fast enough to run Discourse, costs $$$ less and supports PWA notifications (which Discourse team has passionately supported).

Unfortunately it will be a while yet before Browser evolution slows down.