I was finally getting around to uploading images for my profile & user card backgrounds, which got me looking at my user card, and vertically it feels very wasteful. Perhaps this is partially due to either space being reserved for planned additions or me simply not having used / unlocked specific things yet, but…

Here’s how my user card appears on Meta at the moment; 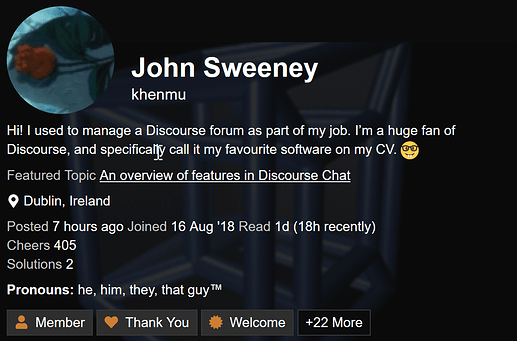 I crudely hacked the image a bit to mockup some changes; 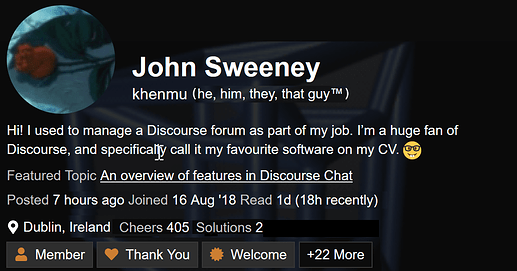 Apart from the quality of the mockup, I much prefer it - the user card more closely resembles how it appeared years ago; it’s somewhat shorter, it’s a bit more compact, and it’s feeling a little less bloated.

Would love to hear what others think!

I totally agree with you. There is much scope for making it more compact, and I think it would be a good thing.

The recently added Pronouns aren’t just on a line by themselves (and formatted differently), but are about as far away from your name as possible - which feels like a strange design choice.

The Pronouns one is a Custom User Field, which is why it looks a bit different than the others and is placed in that section.

I like having the optional plugin ones on the same line though. I think that looks a lot neater. I’m trying to think if there are any others that we don’t have enabled here?

If we turned on display local time in user card that would go next to location, which would maybe pad that line out a bit more?

I think it must be quite tricky to balance out where things go for all sites as so much can be added/turned off. I wonder if a theme component could make it more customisable?