My old MyBB forum had a simple charting feature that showed the userbase size over time. It came in handy in this presentation I gave about the growth of the forum, where I overlaid certain events on the chart.

/admin/reports/signups is a start, but less visually compelling.

Haven’t found any plugins that display charts, but they would be a nice visual addition to the Discourse dashboard:

Daily/Monthly Active Users can be generated with Google Analytics, but the process isn’t easy, and won’t cover any data retroactively (i.e. before installing GA), or from imported posts.

This would be very handy! As a Community Manager, it matters a lot to have visual analytics.

I’m a community manager too, and have such visual chart could be really handy,

A while back I started a plugin a bit like this for use on Mozilla’s Discourse instance called “Are we Discoursing yet?” (to fit in with a bit of a trend: Areweyet - MozillaWiki), the result of which can be seen at http://arewediscoursingyet.com/ 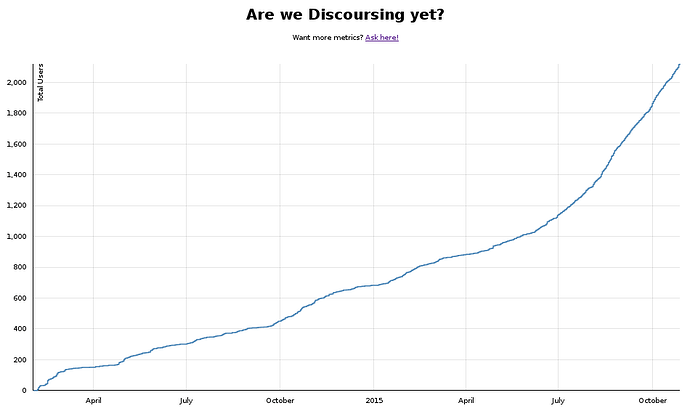 I haven’t really found the time to do any more work on it recently, but the source is at: https://github.com/Mozilla-cIT/arewediscoursingyet (plugin is in plugin branch, frontend is in gh-pages branch).

At the moment it’s rather tailor made for Mozilla (and also rather badly made, it was only after I’d created it that I realised that Discourse was already creating exactly the stats I wanted…), and I doubt I’ll get round to improving it, let alone creating a general purpose plugin, anytime soon.

Of course, if somebody wants to jingle a bag of coins in front of my face that might change things.

I need these kind of statistics and graph:

Smf and other forum tool have this charts and they’re pretty cool and useful, I’d like to use them with my stakeholders

These graphs mostly already exist, click through on the dashboard.

Yes, but I can’t have a grpah as in the example given above!
Discourse data and graph are good but not very useful because there aren’t aggregated data, for example new users/posts/topics/loggeduser by month or quarter could be enough. That data are very interesting and useful from the community perspective since I can use them as ROI

Export such data from reports and sum them after it’s not very handy.

Check something like this, IMHO I miss this data and a graph based on them

I would love something fairly close to the GitHub Contributors stats: 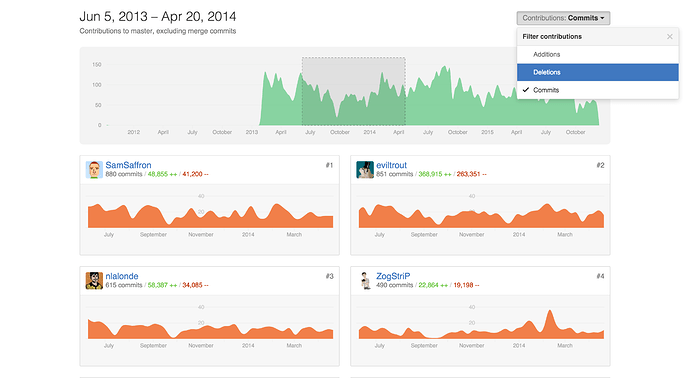 Imagine that with options for “Topics, posts, likes” etc., which could be shown all-at-once (with differently color-coded graphs) or individually. The simple date-range selector is also a wonderful feature.

I love checking out the GD Contributors tab, it tells stories. Look at these three for instance: 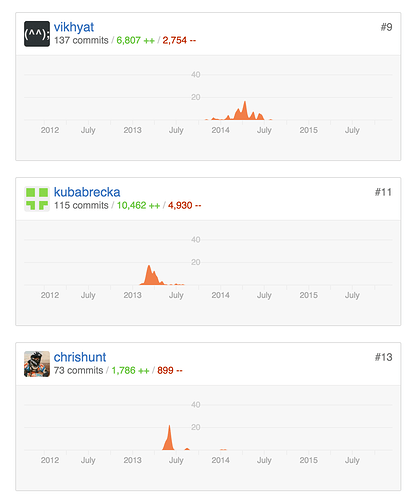 What happened here? Did they just happily scratch their itch and that’s all there is to it, or did we do something wrong that deterred them from continuing to contribute?

Not sure, you could email them to find out. Might be a good idea. (I think they just moved on to other stuff, which is usually the case.)

Did they just happily scratch their itch and that’s all there is to it, or did we do something wrong that deterred them from continuing to contribute?

Like this approach, as cmgr working hard on retention and keeping existing member active such informations are extremely useful!

I think any stats would need to be “broad trends”

A person might leave a forum for any of countless reasons. Health, family obligations, new employment etc. Real Life has a way of getting in the way and making one change course from time to time.

True, it may not always be a “lack of time” reason, one may leave because they are no longer interested in what is being discussed, maybe there is to much “noise” for their liking, maybe they found someplace they like better. (cough, Facebook)

And I’m not so sure contacting members for an “exit interview” would provide the true reasons or even be a good thing to do.

On the other hand, I do think that seeing an increase or decrease over time would suggest how well a forum is doing. As long as it is remembered that - to steal from SEOers - correlation does not equal causation

From my experience people leave just because they’re not interested so much in your community or only distracted by something else, so they forget to visit, join or be active.
Mentioning them, sending a PM or asking their thoughts about a topic works pretty well in my case: retention is my primary goal currently.
Have those data, graph or statistics help me to know who ping or how/where move forward.

Perhaps that topic is restricted to tl3, i don’t have access to view it

Btw, thanks to the Data Explorer Plugin and the query that @riking created, we have a great visualization of the interaction in our 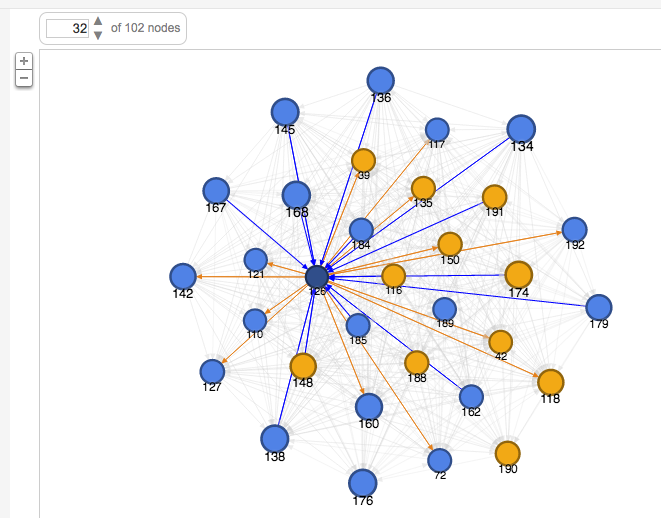 The way to do it:

Thanks to the Data Explorer Plugin and the query that @riking created, we have a great visualization of the interaction in our

instance. [image] You can also play with it. It’s easy to do it: 1 - Install Data Explorer plugin 2 - Run the riking query or an modified version of it.

We now have fancy visual graphs to help community managers better track activity trends in their Discourse forum. This feature was quietly released by @sam some weeks ago; now we’d like some feedback. You can see the graph for any traffic stat in your dashboard by clicking on it, like these ones: [image] Example stats from Meta Identify peaks at a glance: [image] Set custom date ranges: [image] Filter data for specific groups: [image]