Using community.home-assistant.io w/ chrome Version 95.0.4638.54 (Official Build) (64-bit). Having an odd issue, only present on my home desktop. Work desktop appears to be fine, however I don’t know the current chrome version.

Clicking on search, hamburger (3 vertical lines), or your user icon, the page auto scrolls to the top of the current scrollbar instead of exposing the combobox.

EDIT: The only way it will appear when the combobox is detached is when you’re at the top of the page (Post 1): 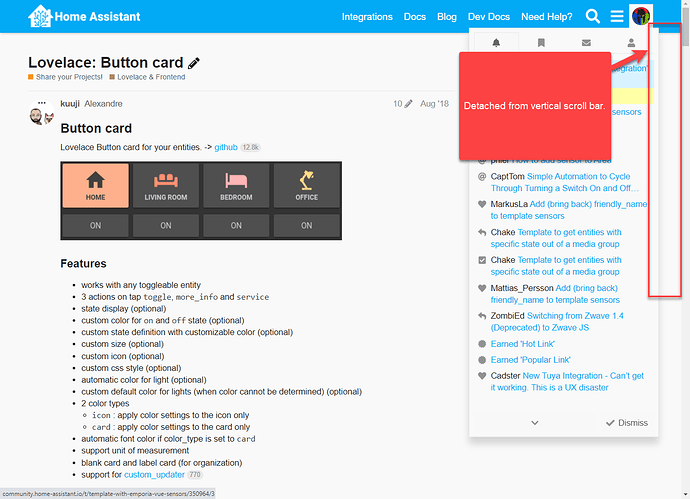 Unless you can repro it here, or on try.discourse.org, almost certainly an issue with your CSS theming and layout. Also try in safe mode.

I am having trouble reproducing this, what are the specific steps? I have a super wide browser, I am scrolled down in this topic and I am clicking on the avatar and it isn’t scrolling to top?

There’s really not much to it. Just widen your browser. For what it’s worth, this is not happening in Edge on the same PC. Only chrome.

Dev tools in safemode turn up empty outside message that may or may not be related:

A page or script is accessing at least one of navigator.userAgent , navigator.appVersion , and navigator.platform . Starting in Chrome 101, the amount of information available in the User Agent string will be reduced.

Note that for performance reasons, only the first access to one of the properties is shown.

Do you have any browser extensions? Can you try in an incognito window?

Recategorizing as support until at least one other person can repro this. I definitely can’t, and I am on Chrome/Windows.

Happens in incognito as well.

I’m up to date on Windows / Chrome as well

You have links to setup a development server where I can debug into the issue? Is it typically setup through vscode or vs?

We had someone reporting the same.
Version 95.0.4638.54 (Offizieller Build) (64-Bit)
He also tried to use the keyboard shortcuts, but the problem was the same.

I’m willing to try anything and I’ve been developing for years now. This bug is annoying the crap out of me, any direction/link/whatever towards finding the root cause of this issue would be welcomed seeing that you can’t reproduce it.

I updated Chrome on my desktop today and started seeing this issue. This should fix it.

Context: https://meta.discourse.org/t/width-of-page-causes-an-autoscroll-to-t…he-top-of-the-page-when-accessing-serach-user-hamburger-comboboxes-chrome-only/207459 When one of the header panels is opened, there's some logic to set the focus either on the first link - in the case of the hamburger and user menus - or the search bar in the case of the search panel. Hamburger https://github.com/discourse/discourse/blob/1f8939c0f130892397fb7ee8b0f348f2a7f8b636/app/assets/javascripts/discourse/app/widgets/header.js#L497 User menu https://github.com/discourse/discourse/blob/1f8939c0f130892397fb7ee8b0f348f2a7f8b636/app/assets/javascripts/discourse/app/widgets/header.js#L487 Search panel https://github.com/discourse/discourse/blob/1f8939c0f130892397fb7ee8b0f348f2a7f8b636/app/assets/javascripts/discourse/app/widgets/header.js#L627 When `focus()` is called, the browser automatically scrolls to that element. This wouldn't normally be an issue; however, since the header is set to sticky, it causes problems on Chrome specifically. Here's what it looks like https://d11a6trkgmumsb.cloudfront.net/original/3X/1/e/1e5cafe12de556ba09f13c42cd74f1f38c873868.mp4 and it's even more prominent on topic pages since it tries to find the top of the page, causing more posts to load, which causes the height to change, which causes jitter. This PR adds the [preventScroll](https://developer.mozilla.org/en-US/docs/Web/API/HTMLElement/focus#focus_with_focusoption) option to `focus()` to prevent this automatic scrolling Here's what it looks like after https://d11a6trkgmumsb.cloudfront.net/original/3X/8/e/8e475f7b3a4cd7151fa034343e88c4ab4d09cb11.mp4

There’s more details in the PR description. The fix is now live on Meta.

I read a little bit more about this and managed to track down the issue. This bug - and a few other bugs relating to CSS sticky - will only occur if you have

enabled in Chrome flags. This explains why only some people were getting it even though it’s the same version of Chrome.

If you’re seeing this issue. Make sure that it’s disabled here.

I sent a PR to revert the change above because it’s no longer necessary.