With the new right gutter, where should "Reply as Linked Topic" go? 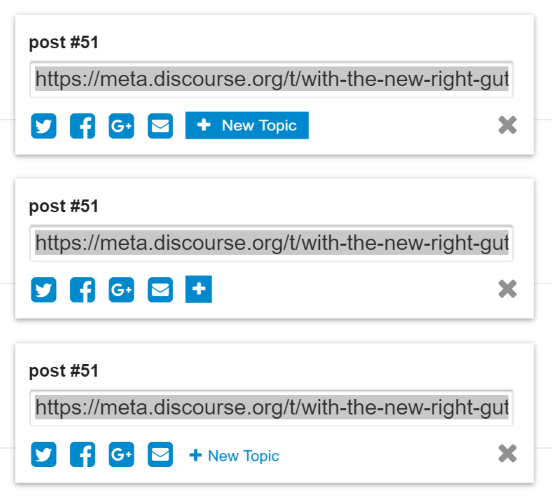 The simple link looks best to me, and properly sets itself off from the other methods – appropriate, since it is a bit different.

The simple link looks best to me

I agree, the first two options are too similar to the share buttons.

Also adding my vote for the 3rd option.

Option 2 has no context - is it going to show more buttons, expand the window - I’m not sure.

Option 1 feels a bit too strong.

Feels a shame to have this hidden in a menu. I predict having to explicitly educate users about it now, rather than the previous discoverable method.

I really can’t see any other option here, one advantage of this change is that it unlocks the feature on mobile

Of these I think option 3 makes most sense.

Feels a shame to have this hidden in a menu. I predict having to explicitly educate users about it now, rather than the previous discoverable method.

I agree that it’s a bit too hidden. Perhaps the + icon could be available to be added to the post menu, that works the same way? And when a topic is closed, the reply button is changed to + New Topic as I think has been proposed elsewhere.

Unfortunately I’m distracted with getting ready for a trip (meetups in Berlin, Toulouse, Dar es Salaam this summer, anyone?) so not really able to focus properly on this, and feel a bit uneasy about the big changes coming without being able to properly pay attention to them. But I’m liking the direction this is taking!

I too prefer the third mock-up.

I see two main uses for a Reply As

For the first I think more prominent / sooner would be better
For the second I think flagging moderators would be preferred, but I can see how some would rather not petition

My first thought of having it in the composer would work for off-topic use, but of course not for closed topics.

Overall I like having the Reply As in the share menu.
As for it being “hidden”, Discourse has quite a few features that take some time or digging to discover.
It could be argued this is poor UX, but IMHO as long as a feature can be found or learned about when the need for it arises it isn’t that much of a problem.

I think it’s sufficient to put it in the share screen. It seems to not be a heavily used feature, and I have never had any other reason to click the ‘link to post’ button up until now. It makes sense to put it there. Also, keyboard users will also be able to continue to have single click reply as linked topic.

And being able to have this on mobile is a huge +!

I predict having to explicitly educate users about it now, rather than the previous discoverable method.

I was already spending lots of time educating users because the reply-as-linked-topic link was not always visible.

I think that would be super super dangerous personally. Maybe only for tl2 users or higher.

I don’t see the danger. Is it dangerous because you don’t want new people to re-open a closed topic by starting a new discussion because they’d do it accidentally?

But the users I care about are tl2 anyway, so that’d be fine for my edge case.

I see two main uses for a Reply As

My third is that I have topics in read-only categories that function as conversation starters (my colleagues would call them “assignments”). Students start a new topic with their solution to a problem. When their topics/answers do not start with the “Continuing discussion” header, one is left to guess just what problem the person’s answer is solving. (And now, those who are unable to Reply-as are the most likely to submit answers that are nonsense.)

That seemed to be discussed back up a bit in this thread:

With the new right gutter, where should "Reply as Linked Topic" go? ux

Interesting, so maybe “Quote Reply” should have the little drop down to select start a new topic, like this: [image] But then again as @cpradio pointed out the keyboard shortcuts also work for this kind of power user scenario…

Sorry for coming late to this - I have wondered why the “reply as linked topic went missing”. We love that feature on our site, so would be happy if it returned to its visible place

perhaps the first option but instead of “plus new topic” , with

or something instead of “plus” to indicate that you are replying, but creating a new thread.

This thread has already suggested ways for the feature to remain visible. “Open” posts can be reply-as-new-topicked by ticking a checkbox in the composer. “closed” ones can have the Reply button replaced with a Reply As New Topic button.

posts can be reply-as-new-topicked by ticking a checkbox in the composer.

This feels way to rare a feature to be visible every time I look at the composer. Maybe behind the “gear”

The more I think about this and try to do linked topics with these new ideas in mind, the more I think this approach would be not circuitous but pure awesomeness. Sensible, easily discovered, and easily explained in case anyone is looking for it and asks.

I like the idea – the only difficult issue I can see is that the post link would have to not be auto selected anymore. Otherwise, your quote selection is un-selected.

How about right as we select the text?

Ok, so let’s try this

'Reply as new topic' link in the share dialog

It’s obnoxious, IMO, to show it every time you select text. It’s an uncommon action, and we don’t want to show the ejector seat button to the average user who is doing their commute to and from work…

Shouldn’t it be quoting the post you choose Reply as New Topic from? Or at least putting a link in the composer window? (keyboard shortcut shows the data it pulls in still)

As, right now, it doesn’t really serve a purpose without that context being put in automatically.