I recently started a self hosted discourse community site and am learning a bunch but have a long way to go. I was able to sign up for an e-mail list and when I receive an e-mail from the mailing list, it automatically creates a post in a specific category. The title of the post is great, however the post is just a link and nothing more. The link takes me to the USFDA site instead of the article.

I am hoping I am just missing a checkbox in Discourse or something, but am wondering if it’s something to do with my e-mail configuration.

Here’s a screenshot of the e-mail in Horde:

Any help would be appreciated!

It’s likely the unusual formatting of the email is making the incoming mail processor think large parts of the email are a signature, and are thus getting removed before posting.

the unusual formatting of the email

Could you clarify how the incoming mail processor determines the break point? I understand that it is probably a complex algorithm, given the diversity of email formats, but perhaps there are some rules of thumb? Because intuitively I often have a hard time understanding why an email was rendered the way it was. In this case, for example, I might expect the separating line (--------) to be interpreted as the beginning of an email footer (although it would be better if only up to, say, four dashes are interpreted in this way, but not more), but that’s clearly not what happened.

Any help would be appreciated!

So what did happen? Let’s see.

Unfortunately, the Horde view of the mail doesn’t allow us to see why this is so (you need to look at the raw email body, which you find in your incoming emails in the admin section), but my guess is that it has something to do with tables. Either the header was in a different table than the rest of the email and discourse only looks at the first table (which might make sense) or, if the email consists of a single table, discourse may only be looking at the first row (which would seem more problematic).

It would be good to possibly have an “advanced test” tab in the admin / email UI @zogstrip where you can paste in a raw email and see what gets stripped.

@nbianca can you add that “advanced test” tab in Admin > Emails?

I started working on this in

Here is a little preview: 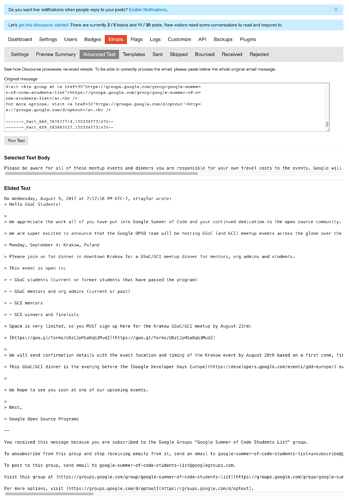 Looks good! Is there a way to wrap the text in the preview? Super long lines (and horizontal scrolling) make it hard to process.

This topic was automatically closed after 45 hours. New replies are no longer allowed.