Ability to select separate locales for public and admin interfaces

In non-English communities it is often desired to keep the admin interface in English (as the admins are often technical people who know English), but the public interface is set to the languages related to the community.

Keeping the admin interface in English reduces the translation workload. However, in the current situation where many phrases are shared between public and admin interface, it is not possible to translate only public facing strings. Being able to select a different locale for the admin interface from the public one would be very helpful.

Being able to select a different locale for the admin interface from the public one would be very helpful.

A more general solution might be to allow each user to select their preferred interface.

A more general solution might be to allow each user to select their preferred interface.

That is already possible. There is a configuration option to “allow users to choose their own language interface preference”.

However, it does not solve the issue described in this feature request. If I am an admin of my board, my preference will be global for me which I don’t want. I want to be able to access admin interface in English while the public facing area and inline moderation tools all in a different language of my choice. For now, it would require me to change the language each time I switch back and forth between the two interfaces. Unless I chose to use two separate browsers with no shared sessions.

I believe this was requested before perhaps by @meglio or maybe I am misremembering. But I definitely remember a prior request.

Yes, it was me. This is still something I would like to use.

This would be a good option IMO as well.

For some languages it is also considerably more complex to translate some of the admin interface language, and weak translations obfuscate things for admins, make interface hardto understand (much harder than English version).

For some languages it is also considerably more complex to translate some of the admin interface language, and weak translations obfuscate things for admins, make interface hardto understand (much harder than English version).

Yes, because not all technical terms have well known alternatives in many languages. The issue is even worse for RTL languages where leaving technical terms (or CSS property names for example) as it is in the middle of a translated phrase makes it very difficult to read.

Adding this old topic here for the reference. The two can be merged if that makes more sense.

(Separating locales for admin panel and forum seems to be related as well.)

The current state of things is a bit strange, and I am not sure what is feature, what is bug, and what is just inconsistency.

This is how the admin dashboard looks like when the default site locale and the personal locale differ: 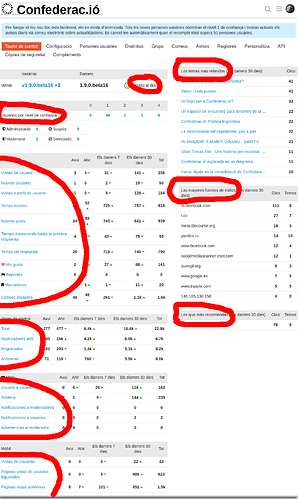 The areas in red are showing the site locale, while the rest is displayed in the personal locale. Note that in some cases the same title has two different locales.

This is not the end of the world because it is likely that the admins will know the default site language and of course the personal language that they have selected. It’s just strange.

it would definitely be something useful. almost half of the content is already in English when chosing persian locale. 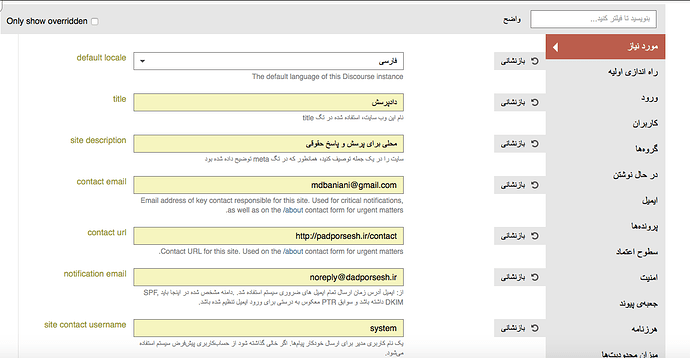 the feature is also utilized on wordpress
https://wordpress.org/plugins/english-wp-admin/

Hi there,
has been there any progress in this matter yet?
Our community will be multi-lingual, as there will categories (channels/groups) for local nodes for discussion in the local language. We cannot expect that all of those can read English, so interface has to be in their local language. To keep things simple, it shall be the same for admins being active in these categories but the admin interface shall remain English only as otherwise you get lost in translating the expression, when explaining a function/featrue request/bug in the local category or here.

There is no way to have only the admin section in a different locale than the rest of the site.

The work around is that Users can select their locale. You can have admins select English or change it or use a different when they do admin tasks.