Avatar Flair (not Badges) for Groups

Sometimes I like to see my avatar without any pieces of flair on it, like my profile page. We’re getting into personal preferences now… The profile page shows all your group memberships, so the flair (which only shows primary group) is redundant imo.

As for topic lists, the avatars there are small, so the flair would have to be scaled down and might be hard to see. 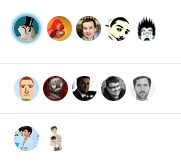 Those avatars are about the same size as the flair. On mobile, the flair might make sense in topic lists though since we only show one medium size avatar.

This makes sense and I certainly don’t want to be responsible for encouraging scope creep. By all means, take it out of the user card if it’s getting in the way. I agree that on topic lists where the avatar is tiny it’s a little silly (and busy) to display flair.

But on our site we use flair to show who is a “core member”. From the faq:

Core Members have a

next to their name. These are notable legal empowerment organizations who enjoy exclusive benefits and a special role in our community.

It’s great to see the star in the flow of discussions and I like it!

Maybe flair is the wrong place to expect this, but I think it would make sense to be able to see the star pretty much anywhere you see the avatar - including on the member profile. Right now there’s nothing there to indicate they are core members except when you click on the badge tab. An example:

Some indication, somewhere, would be appropriate. Maybe it should be handled in a different way on profile pages, e.g. by setting the title for core members.

It’s definitely defensible on the user profile cc @neil I believe that is just the “small” version of the user page.

How did you do that? I don’t see the flair option on the automatic groups @BenLeong DId you have to duplicate the group to achieve it?

Good point - we’ve added the flair images to custom usergroups, rather than the default/automatic ones.

Can you add flair to automatic groups or do we need to make custom/duplicate groups to add admin flair for example?

Flair can only be added to the custom groups. There’s currently no way to use an automatic group as a primary group on a user.

Is it an actual limitation of the system that flair can only be added to custom groups and not automatic ones? Or has it just not been done but is possible and I should therefore go pester the feature requests category?

It seems to me that adding flair for Staff would be a lot easier than having a manual Team group that I have to maintain.

It’s a case of no one demanding it loudly enough I guess. Also, pester is such a harsh word! #pr-welcome ?

I’d love to be able to give my moderators flair by default in the system by either creating a Custom Group with membership linked to an Automatic group, or just adding more flair and other meta data to Automatic groups.

Am I correct in my understanding that flair was never added to the main profile page? Sounded like @neil felt like it wasn’t necessary because groups can display on the full profile and there wasn’t a lot of strong feeling on the other side? Was it made optional?

We are currently hiding groups because we plan to use them to help staff recognize customer plan level or feature adoption, and don’t want non-staff to see that info about others. We want to know if someone has a BIZ account, but we don’t necessarily think that every other user should be privy to that info about someone. So we are actually trying to eliminate all links to groups in our community. Unfortunately we can’t seem to remove them from showing up on the user’s own profile page. Any thoughts on that?

@neil I noticed an odd bug with Avatar Flair today, while cleaning up forum access for some ex-staff accounts.

While a user is in a custom group, that can be set as the “Primary group” via user admin. That part works exactly as expected.

When removing a user from that group, the option to set a primary group disappears. In user admin, it looks like there is no primary group set for that user’s account, and there’s no option to remove the primary user group. Again, not unexpected: if they have no custom group, they can’t have a primary group.

–> However, their profile will still retain any avatar flair that was previously applied. Removing people from a custom usergroup doesn’t remove the flair, so (for example) they’re still visibly identified as a staff member on all their forum posts, even though they no longer have that level of access.

The only way I’ve found of removing this is to add them back to the relevant group, set their Primary group to “none,” and then remove them from the group.

Is this intended behaviour? I can see how it might be (showing the staff flair on posts made while someone was still a staff member), but it feels a little clunky when trying to remove it from a profile.

The user’s primary group should be cleared if they’re removed from that group.

8 posts were split to a new topic: Hidden Group Membership

@BenLeong I was able to reproduce the bug. It happens if you do it from /admin/users/username here by clicking the x:

Doing it from the groups interface clears the primary group as expected. I’ll fix.

Just a minor detail, but it would be nice if the hover state on the flair respected the full name of the group as opposed to the database value.

Hey guys, I’m trying to figure out how to align flairs. Currently, by default our flairs sit far off to the side:

What would the recommended steps be to fix this?

Also, I noticed that if somebody is a member of more than one group with flairs, it assigns the last flair that was changed. Are there plans to build a priority system of some sort, so that one will display over another, based on its priority, if somebody has multiple?

I noticed that if somebody is a member of more than one group with flairs, it assigns the last flair that was changed. Are there plans to build a priority system of some sort, so that one will display over another, based on its priority, if somebody has multiple?

For reference it happens if you set more than a primary groups. At the moment the user is always moved to the last group he entered:

It would be nice to have an extra check box in the group options to set a group as a users’ primary group if and only if they do not already have one. [image] Currently, users are primarily grouped in whatever group they join last with the automatic setting applied. While this is great for groups like staff or site leaders, there are are lesser groups that it would be handy to set as a user’s primary group if and only if they don’t already have one set. This would also make it much easier to d…

by default our flairs sit far off to the side

Are you using a particular theme or your customizations are self-made?
BTW adding a new line of CSS should works.

This is the original code, change the value -6 and set one that suits your customizations