After installing latest discourse updates and the latest version of babble (a couple of days ago, and again yesterday to see if it was fixed), I have problems with sending messages as well as the read indicator is stuck showing there are new messages.

Just now when I was unable to send a message I got a bunch of this error in the browser console:

There were detected accounts with strange user names (which begin from “f5c…” e.g. f5cfe2e6cc098d ) in the list of forum accounts - This is the problem of a specific user or something else?

Has your plugin seen such a problem before?

What could be the reason (there were no channels on the test site up to this point)? 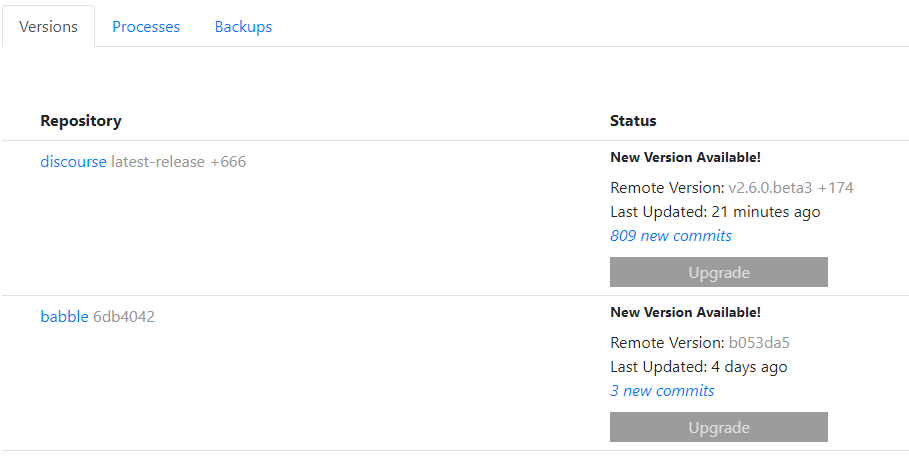 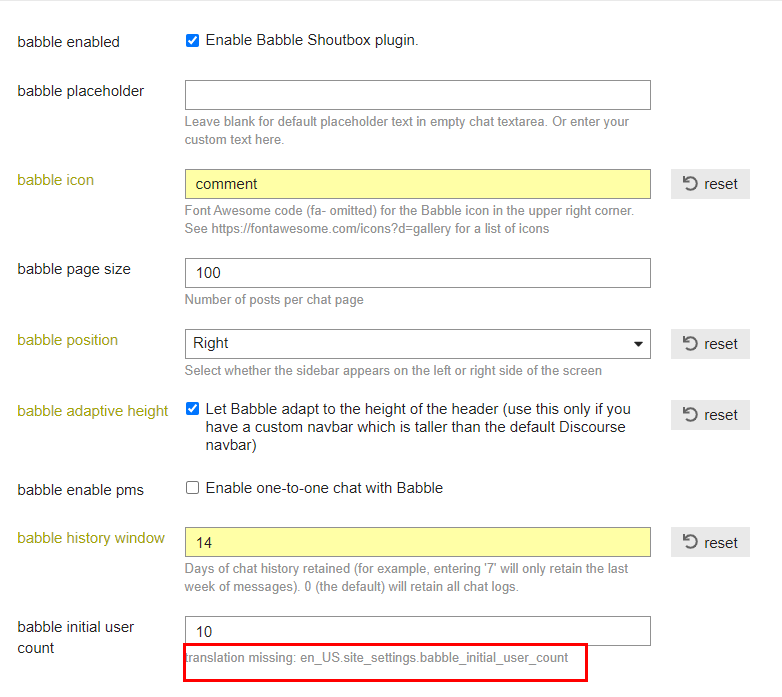 Do you have the plugin enabled in discourse settings?

Yes. And ./launcher rebuild app too

@angus With the lodash removal it looks like we lost the functionality that was taking the user to their first unread chat when opening Babble. Also, there is no dividing line between read and unread any longer.

Was that intentional s part of the move from lodash? I’ve looked through the changes myself, but nothing stood out to me, but I’m only a hack at Discourse.

Thanks for all you’re doing here to keep this active.

Is anyone able to display the expanded chat by default rather than just the icon?

I’m on the latest Discourse version, as well as Babble. We’re experiencing consistent issues with Babble just providing the spinning wheel icon and never going through. In most instances you are forced to do a hard refresh of the browser to see if the message went through.

Example of what I see after every chat I send: 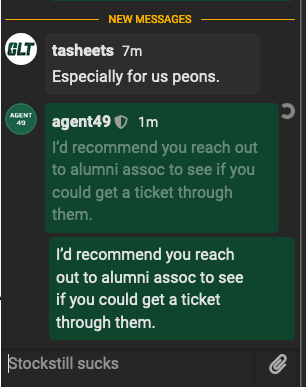 Same issue we are also facing a never ending spinning wheel icon, I hope they fix this soon.

Any update here? The plugin is currently broken on version 2.6.0.beta5 and we had to disable it completely

Thank you in advance for all your hard work, it’s greatly appreciated!

Is it possible to give moderators permissions to babble chat settings?
We keep hitting the roadblock of reaching 10,000 posts in the chat topic.

I want to give moderators the ability to open a new chat. At this point we have to create a new one every week or two. The chat is super popular

tl;dr – It would be great to have someone(s) adopt James Kiesel’s Babble plugin. There are precedents for Discourse plugin adoptions (example) and I know too many people who use Babble don’t want to see it slowly deteriorate to the point where it becomes obsolete.

There’s been a trend over the past two or so years with fewer and fewer updates or bug fixes to Babble. There’s no judgment here – @gdpelican made it quite clear on the original Babble forum thread that he doesn’t have the incentive or desire to continue with Babble. I certainly respect that.

@angus and others have pitched in to fix bugs over the last year or so – which I’m grateful for – but how long can the seemingly random generosity of devs last?

I’m not sure what the process might be to have Babble get adopted by another developer or team of developers. @jomaxro, @simon, or @justin – I think one of you or another Discourse team member might be able to help us out here.

Although I can’t find it anymore, I do believe there was once a discussion about incorporating Babble into Discourse core and the decision was made not to do that. Assuming there’s no chance Babble will become part of Discourse core and therefore officially supported, I don’t see a good path to being able to continue using a functional Babble without someone taking primary responsibility for it.

If money is an issue, I’m happy to seed the pot if necessary on behalf of my Babble-using forum.

I don’t think band-aids and slow, reactive bug fixes are going to cut it much longer with Babble. Can we save it before it becomes unusable?

P.S. I know all about Discourse’s integrations with things like Slack for a chat-like experience within Discourse. I like Babble and don’t want to integrate with a third-party tool for the casual chat experience.

At this time there are no plans for the Discourse team itself to adopt the plugin.

I think at least this should be moved to the #plugin:broken-plugin category, until the bugs get resolved.

This would be a great addition to discourse if you want to have a discussion board and a very lightweight chat feature. Unfortunately it’s not maintained, it’s broken and no official discourse feature…

I don’t want to have a full blown chat server which has again some featues discourse have, too. This is something very complicated for users as they don’t know which system they should use then.

I don’t want to have a full blown chat server which has again some featues discourse have, too. This is something very complicated for users as they don’t know which system they should use then.

We get around this problem 90% by using chat-integration to send topics & replies from particular categories/tags to particular chat systems/channels. babble is a loss, but general integration is the part that really makes Discourse work for our particular community alongside other chat systems.

Summary: Integrate your chat system of choice with Discourse

Install: Follow the plugin installation guide. Features Continuing from Common event system for chatrooms discourse-chat-integration is the product of my Google Summer of Code project with Discourse. It allows sending notifications about new Discourse posts to ‘group chats’ on a number of instant messaging platforms. It is based on, and aims to …

I used it in that way for quite sometime until it started to fall apart.

I ended up starting my own rocket chat server. Babble was good enough to make chat a staple on my site. Rocket chat runs so much smoother. It’s so good though that it’s probably going to decrease forum usage, but it’s too late for me to put that genie back in the bottle.

I’ll fix the immediate issues here in the next day or so, however I agree it needs a dedicated developer.

I’m a little too busy to be that person. The other members of Pavilion are also stretched with their open source responsibilities.

If someone wants to take this plugin on properly, there’s a spot in Pavilion for you, with the access to ongoing paid work that entails.

Like the other members of Pavilion have, you’ll get mentoring from me to get you up to speed with Discourse development.